Shea Netti and Kaia Goode both led their respective squads to the sectional semifinals. Netti spearheaded a stingy defense for Our Lady Of Mercy. Goode topped Section V in scoring for Bishop Kearney/Chesterton. The two senior midfielders were named the Player of the Year as announced by Private-Parochial League coaches.

Netti was named the Division I Player of the Year. The 5-foot-4 senior was an integral cog to the Monarchs’ core by slotting in at both the defender and midfielder positions. As a defender, Netti led a backline which held opponents to 24 goals in 17 games (1.4 goals per game) and pitched four shutouts. One of the four shutouts was a 6-0 win over Sacred Heart (Monsignor Martin) on September 25th, the Monarchs’ largest victory of the season. The Monarchs’ other three shutouts were a 3-0 win over Rush-Henrietta on September 18th, a 1-0 forfeit win over Bishop Kearney/Chesterton on October 12th and another 1-0 win over Aquinas on October 14th.

As a midfielder, Netti contributed to a Monarchs’ offense which registered 73 points (25 goals and 23 assists) and scored multiple goals in seven games. The result was eight victories, the No. 4 seed in Class A1 and a 2-1 win over Webster Thomas in the sectional quarterfinals.

Teammates Caroline D’Anza, Isabella D’Anza, Keira Dall, Haley Edwards and Olivia Morey joined Netti on the Division I All-League team. Caroline D’Anza led the Monarchs in scoring with seven goals and two assists. Dall was second on the team with three goals and three assists. Isabella D’Anza and Edwards both chipped in one goal. D’Anza added three assists as well, the same amount as Morey. Morey also made an impact on defense as a member of the backline.

Goode was named the Division II Player of the Year. The senior, who committed to play basketball at LeMoyne College, split time between midfield and forward positions and exploded for 112 points (55 goals and 12 assists), the most in Section V. Not only did Goode find the back of the net in 14 of 19 games played, she did so multiple times in 13 of those 14 instances. She recorded 10 hat tricks as well. Goode’s best game of the season was on September 17th when she unloaded eight goals and two assists in a 15-0 victory over School Of The Arts.

Overall, Goode powered a Kings’ offense which accumulated 244 points (88 goals and 68 assists). The senior midfielder was one of 10 players to score a goal for the Kings and one of nine to register an assist for the squad this season as well. The result was 12 victories, the No. 6 seed in Class C2 and sectional wins over Caledonia-Mumford, 6-3, and Alfred-Almond, 3-0.

Teammates Akon Awouk and Sophia McMullen joined Goode on the Division II All-League team. Awouk made her impact on both sides of the ball. Offensively, the senior played midfield and was second on the Kings in scoring with 13 assists and nine goals. Defensively, Awouk was the backup goalkeeper behind Kennedy Boston and recorded 60 saves in 480 minutes. McMullen was a dual threat as well with five assists and three goals as a midfielder and contributing to a defensive backline which pitched four shutouts.

Hanna Fenton, Mya Kotsch, Sarah Kretchmer, Bridget Palmer, Emily Silverstein and Amaris Watts rounded out the Division I All-League team for Aquinas. Silverstein led the L’il Irish in scoring with 12 goals and four assists. Watts finished tied for second with three goals and added four assists. Fenton contributed two goals and one assist. Kotsch and Kretchmer both chipped in one goal. Kretchmer registered four assists while Kotsch had one. Palmer was a key contributor for a defensive backline which held opponents to 25 goals in 17 games (1.5 goals per game) and pitched four shutouts.

Katelyn Demarest, Alayna Garwood and Ava Thomas-Guzman earned Division II All-League honors for Northstar Christian. Demarest led the Knights in scoring with nine goals and two assists. Thomas-Guzman was second with seven goals and three assists. Garwood was a dual threat with three assists and two goals as a forward and contributing to a defensive backline which pitched five shutouts in 15 games.

Lydia Harrington and Abby Mincer rounded out the Division II All-League team for Lima Christian. Mincer finished right behind leading goal-scorer Alyssa Marsh with four goals and an assist. Harrington chipped in an assist and was a key contributor on defense. 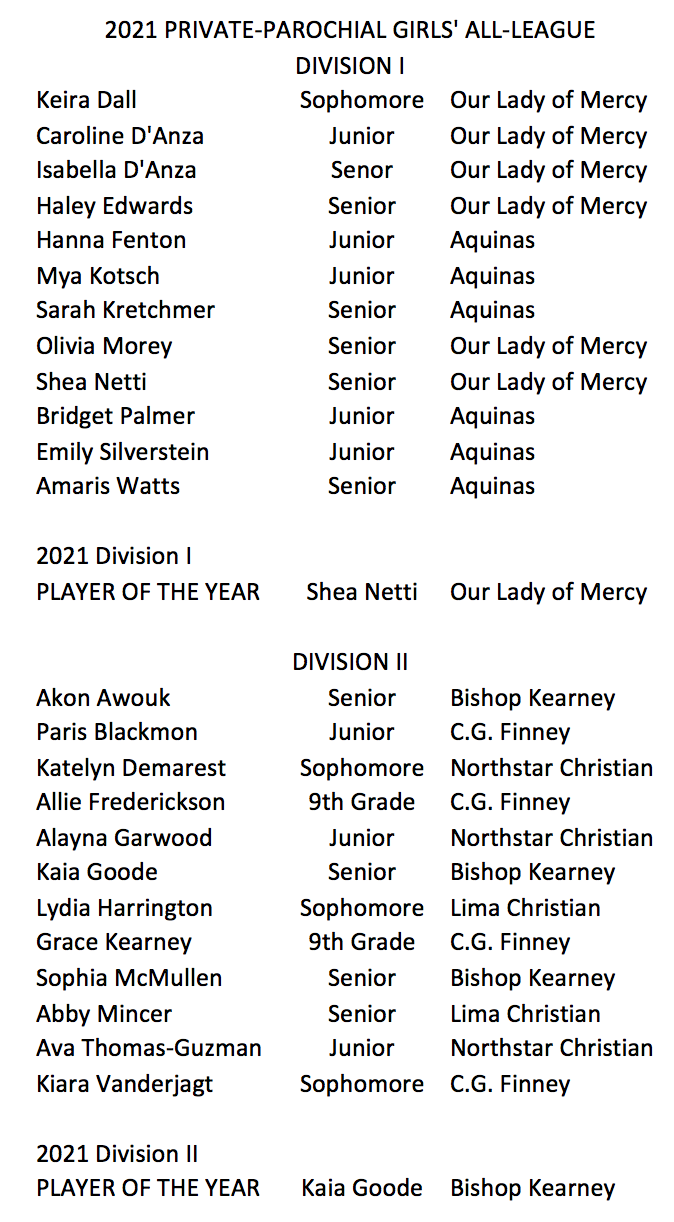