Delaney finished at the top among eligible pitchers with a WHIP (Walks and Hits Per Inning) of 0.94. The 6-foot-4 right-hander registered a 5-2 record with an ERA of 1.83 (2nd in the league) over 38.1 innings pitched. Delaney struck out 36, walked 13 and held hitters to a .163 batting average. He secured the win as the Orioles claimed the league championship.

Henshaw posted a league-best 1.65 ERA over 29.2 innings of work. The left-hander struck out 36 while issuing six base on balls and finished with a WHIP of 1.00. Opposing batters hit .211 against the former Brockport Blue Devil. He was 2-0 on the season.

Beimel was named Defensive Player of the Year. He caught 48.2 innings over 18 games for the Blue Jays without committing an error. Beimel threw out three runners. He also hit .367 on the season with four doubles and 19 RBI.

Brauer nabbed Newcomer of the Year. The former McQuaid Jesuit Knight struck out a league-high 48 batters in 24.2 innings of work. The left-hander, who will attend Wake Forest University, posted a 3-2 record.

Moore nabbed the Hard 90 Award. The Orioles’ leadoff man finished with a league-best 18 stolen bases in as many attempts. The former Hilton Cadet’s on-base percentage of .523 was good for second in the ICBL and his 18 runs scored were enough for fourth. 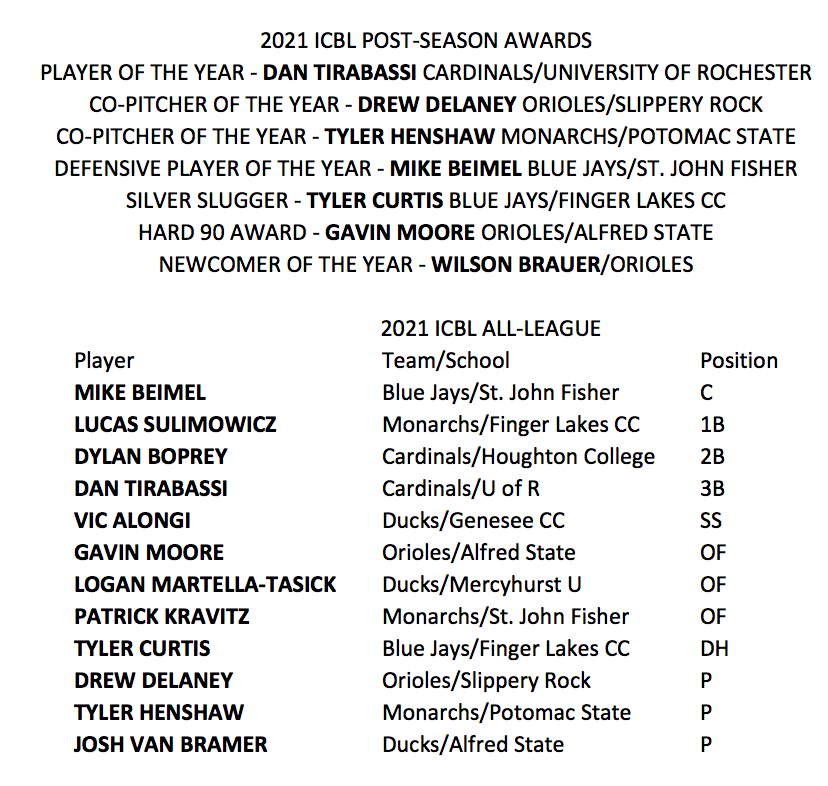