ROCHESTER, N.Y. — With a title on the line, the regular season champions face the team currently riding a league-high winning streak.

The Orioles opened the 2021 season with four wins. On July 11th, they led the league by percentage-points and went on to win their next five to clinch the title in second-to-last week of the season.

The Monarchs have won eight straight and outscored opponents by a combined total of 53-16 during that stretch.

The two teams have faced each other five times this season. They finished in an 8-8 tie on June 24th (the league’s only such result of the season) in a game that went eight innings before being called due to town-enforced time limit.  Three other head-to-head meetings have been decided by one run. One of those contests went eight innings and another decided on a walk-off. The Orioles won two of the first three meetings. The Monarchs took the last two including a 2-1 decision on Wednesday night to clinch a spot in tonight’s championship. 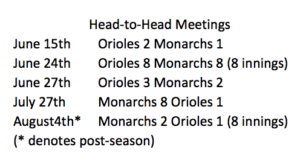 The Monarchs have lost two in a row on two occasions this season. The Orioles will need replicate that tonight in order to win the double-elimination tournament. 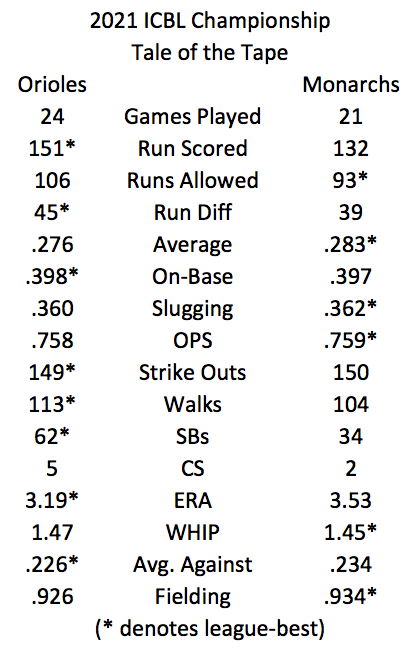 Details: The Monarchs need one win tonight. The Orioles have to take two.

First pitch of game one is scheduled for 5:30 p.m. at Penfield’s Bachman Field. Game two (if necessary) will follow 30 minutes after the completion of game one.