The freshman and senior guard were named the Players of the Year as announced by the Private/Parochial League.

Council averaged 25.2 points per game to earn division one honors. The senior guard netted 20 or more points in 18 games, including a season-high 35 on December 27th against Leadership Academy. It was Council’s third straight 30-point game at the time as well. For the season, the 6-foot-3 guard eclipsed the 30-point plateau five times. Council completed his three-year varsity career with 1,077 points.

Robinson was Section V’s leading scorer with 957 points (43.5 points per game) and named Division II Player of the Year. The freshman guard lit up the scoreboard, netting 30 or more points 19 times, 40-plus points 15 times and 50-plus points eight times. On January seventh, Robinson became the fifth player in Section V Boys’ Basketball history to score 60 points in a game as he exploded for 65 against Rochester Prep. The 6-foot guard has 1,576 career varsity points. 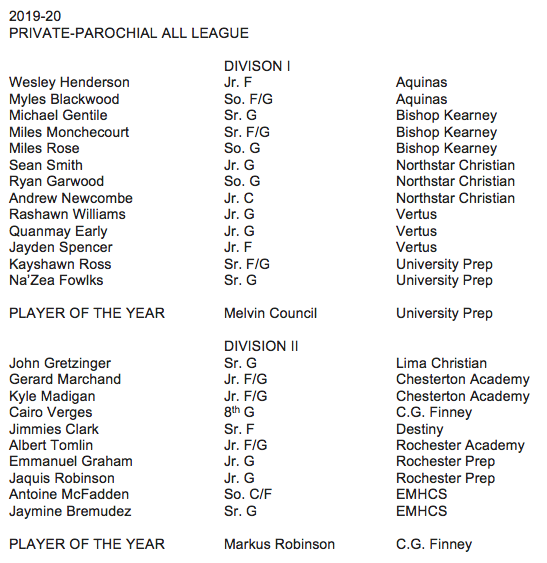