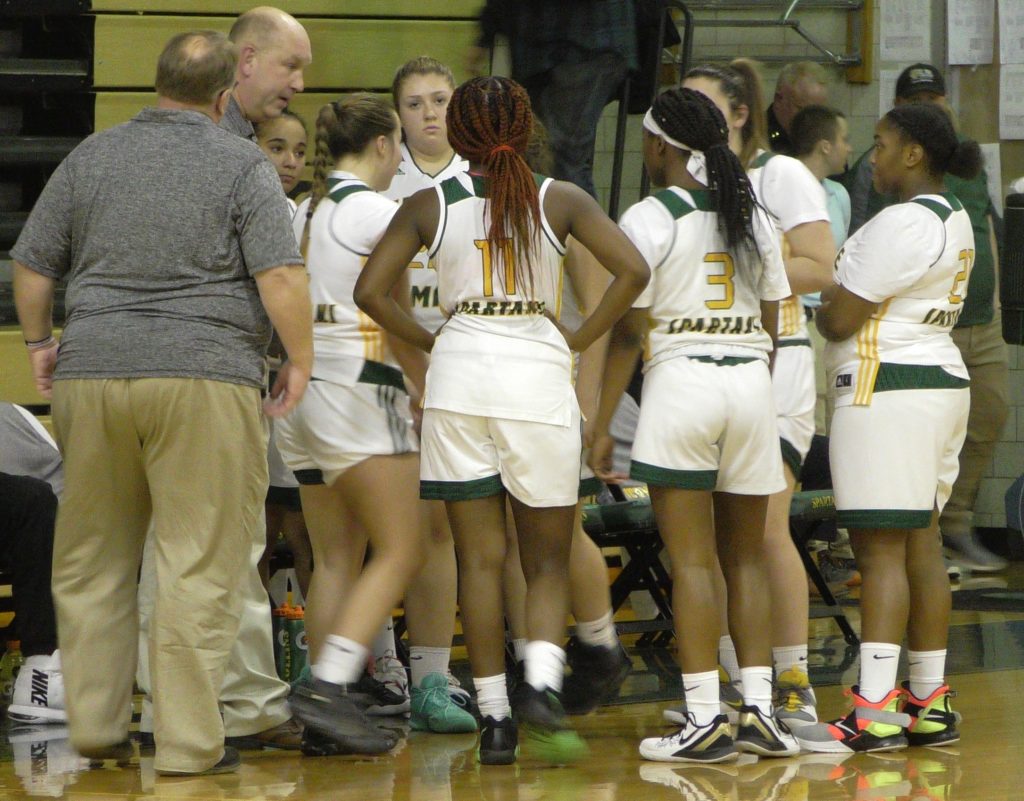 Taylor Jung scored seven of her game-high 21 points in the first quarter as the Lady Spartans jumped to a double-digit lead on their way to a 57-46 victory over Attica in non-league action.

“It feels really good,” Jeff Jung said after his first win at the Olympia helm. “It’s really the first pressure game outside of AAU that I’ve had, so it was nice to get one under the belt early.”

Taylor Jung hit a pair of wing 3-pointers to give Olympia a lead it did not surrender at 6-2.

Janelle Miller finished a layup. Grace Collins scored in the lane, and Giana Dimora converted a second-chance opportunity for a 13-3 Olympia advantage  after eight minutes of play.

Jung drilled another triple, and Miller hit a putback for the Lady Spartans’ largest lead of the first half at 27-14.

“A big piece of it was the girls saw her get hot, and they were all looking for her,” the elder Jung said of his daughter’s performance. “That’s our whole together motto that we’re trying to sell here.”

Cle’Anna Spencer gets the steal and leads Taylor Jung for 2 of her game-high 15. Janelle Miller has 8 and @GirlsOlympia leads Attica at halftime: 29-18. Mary Webber pacing Attica with 6 points. pic.twitter.com/HXr0F4dxbI

Collins knocked down a catch-and-shoot jumper from the free throw line for a 14-point Olympia advantage early in the third quarter, but Attica responded with six straight.

Makenna Jarnot scored on back-to-back possessions, and Elizabeth Newell converted a rebound and putback to cut the deficit to eight at 39-31.

Nondja Nelson stops a 6-0 Attica run with her first of two triples. Going to the 4th, @GirlsOlympia leads 45-34 pic.twitter.com/W1Apa0gglI

It was as close as the Blue Devils would get.

Two more treys from Jung and a bank three from Collins made it an 18-point game with less than three minutes remaining.

“They took a couple punches and got back up,” Jung said of squad’s ability to respond to an opponent’s run. “They reacted well. We didn’t go real deep on our bench. We’re trying some things.”

Nondja Nelson stops a 6-0 Attica run with her first of two triples. Going to the 4th, @GirlsOlympia leads 45-34 pic.twitter.com/W1Apa0gglI

Olympia travels to Livonia for a 7:30 PM tip, Friday.

Come out and support our local unsung heroes and catch the New Lady Spartans in action as well in their season opener 💚🏀💛 pic.twitter.com/WtNVZoIgXC

The game was part of First Responders Night at the school. Proceeds from the event went to Rochester Police Department Officer Denny Wright who was injured in the line of duty.