ROCHESTER, N.Y. — The canopy tent used to shield the McQuaid bench players from the elements didn’t make it through the game.

The Jesuit Knights’ soccer team, though, continued its season.

McQuaid endured varying weather conditions and the Penfield XI to reach the Class AA finals for the second time in three years.

Alex Klimowski scored his first varsity goal, and Ryan Brown added a tally from the other side of midfield as the Jesuit Knights downed Penfield, 2-0.

“We really kinda talked about it yesterday because we knew the weather was coming,” McQuaid head coach Nino Pilato said. “Before the game we just discussed it again about controlling ourselves and staying focused. Weather, refs all that stuff are the uncontrollable. That was something we kinda harped on and just focused on our game. It was a matter of doing the best we could with what was out there.”

Klimowski gave McQuaid all the offense it needed when the senior converted on a corner kick opportunity with 9:43 remaining in the first half.

“I’m a defender, so I’m not usually at the offensive end of the field,” Klimowski said. “I pushed up for the corner kick. I was able to get a foot on the ball and bury it.”

Teammate Elliot Aguirre camped on the far post and when the service from the right corner flag sailed through the six-yard box, the sophomore headed the ball back into the goalmouth. Klimowski collected it and found the back of the net.

“He is one of our workhorse defenders,” Pilato said of Klimowski. “He’s the type of kid who will run straight into a wall and not ask a question. If you tell him ‘Alex run through the fence,’ he won’t even ask why coach? He’ll just do it. He’s that kind of kid.”

The scored stayed that way until late in the second half. With less than 10 minutes remaining in the contest, the Penfield backline including Patriots’ goalkeeper Ryan Wensley pushed up field looking for the equalizer.

The sideways rain, though. pic.twitter.com/M33phhH6Lr

Brown sent a volley into the air that the wind caught and carried to the Penfield end. The ball bounded over Wensley’s head and into the Patriots net. Standing on his own 37-yard line (using the football markings on the field), Brown’s shot measured 73 yards including the 10 yards of the opposite end zone.

It was senior’s third goal of the season.

McQuaid will meet Fairport in Tuesday’s final. A 7:30 PM kickoff is scheduled at Spencerport Central Schools.

The players warmed up for the game with a fog descending upon Erna Frank Field on the campus of Eastridge Central Schools. By kickoff the cloudlike mass lifted. A steady rain accompanied play for the first 20 minutes of the game but relented late in the first half.

The rain returned to start the second stanza Those showers became horizontal with 20:00 minutes remaining in the game as winds whipped across the turf. Capsized corner flags needed tending.

Less than 20 minutes remaining and the wind has made an appearance. Class AA BSOC semifinals pic.twitter.com/Si1ZwWvHZe 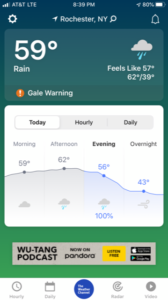 “It was brutal out there,” Klimowski said. “The wind came and dropped the temperature.”

As for the canopy borrowed from the school’s cross-country team?

“They got it back in one piece, though,” Pilato noted. “They folded it up.”

With any luck, the tent won’t be needed next Tuesday.