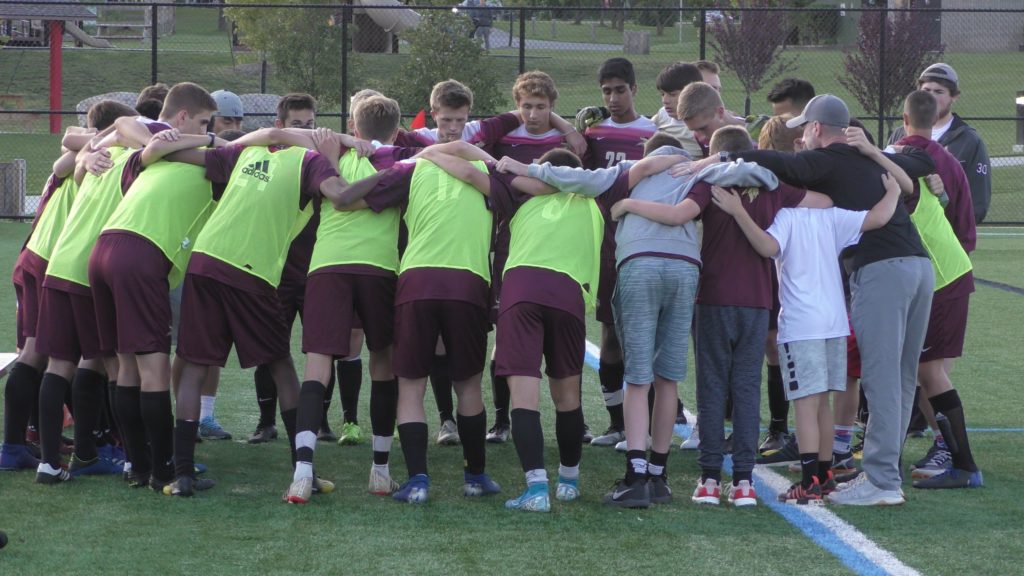 Strikes finding the back of the net, though, didn’t come easily.

That is until Hajun Lee changed the trend in the 62nd minute.

Lee and teammate Pierce VanBenthuysen scored a pair of late goals, and the Vikings beat Honeoye Falls-Lima, 2-0 for the their first victory of the season.

Deadlocked in a scoreless tie with less than 20 minutes remaining, Dom Tabechian drew a pair of defenders when he took a pass from Lee inside the 18-yard box. Tabechian returned the ball when his teammate stayed with the play along the left side, and Lee put the eventual game winner in the opposite side netting.

“The play started in the middle,” Lee explained. “We had a lot of shots, a lot of opportunities from outside the 18 (yard box) and couldn’t finish. We were able to get inside this time. I saw the chance and I put my heart into it. As soon as I saw the the ball come my way, all I could see was putting it into the net.”

Coming off a 1-0 loss to Brighton where Mendon gave up a goal in the 77th minute, Lee’s marker snapped a scoreless drought that lasted over 140 minutes.

“When that’s going on, you just hope for the best,” Mendon head coach Mark Hurley said. “Soccer is a cruel game at times. Sometimes you can have the best play and lose one-nothing. At the end of the day, you got get the dub and put the ball in the back of the net. I was relieved when we finally got one.”

“I’ve been getting the ball a lot in the middle and just going at them,” the senior midfielder explained. “Too many times I was shooting from too far out. On that play, I realized the defenders were back-pedaling. I went at ‘em until they forced me to shoot. I looked up, picked the bottom corner and hit it. It’s exhilarating. It felt so good. I knew it was over after that.”

Mendon opened the season with a 3-1 loss to crosstown rival, Pittsford Sutherland – a game in which the Knights struck for three goals over a 20-minute span in the first half. After being shutout on Saturday, the Vikings peppered 19 shots at HF-L goalkeeper Brian Reinke.

“The last two games have been tough, definitely,” VanBenthuysen noted. “We fought through adversity. The last game it was tough losing in the final minutes.  We’re using that as fuel and going on and learning from our mistakes. We’re just getting better game by game. By the team it hits postseason, we’re going to be ready.”