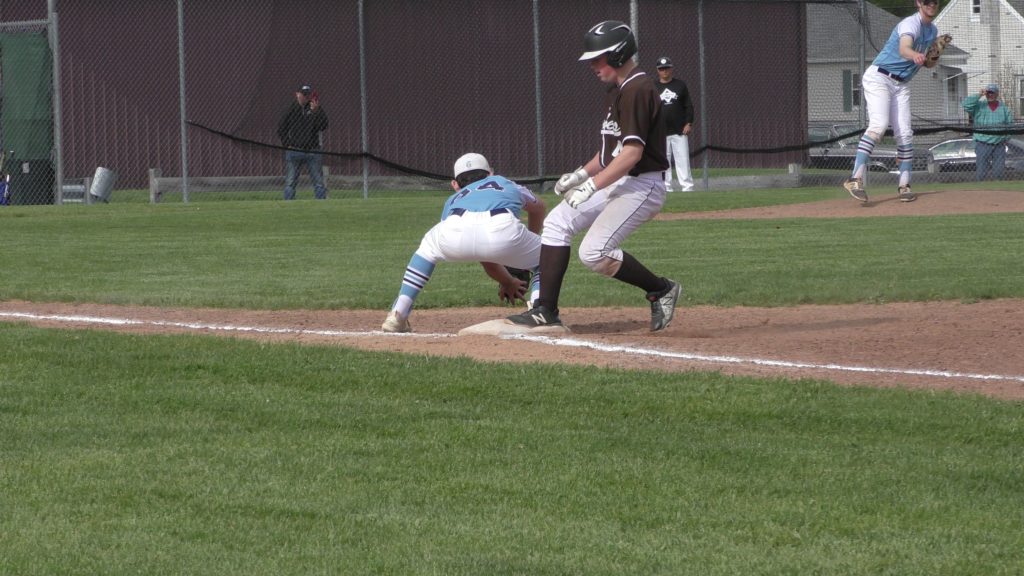 BROCKPORT 16
GREECE ODYSSEY 0
Nick Johnson struck out eight batters and pitched a five shutout innings as Brockport (6-12) won its third straight. Johnson also contributed offensively, going 1-for-3 with two runs and two RBI. Devyn Scheidt finished 3-for-4 with an RBI double in the third inning and scored two runs. CJ Wiest went 2-for-4 with a two RBI double in the sixth inning and scored three runs. Troy Leibert and Sam Velletri had a hit apiece with two runs scored and an RBI. Ryan Judd picked up the save in relief, pitching the last two innings and striking out the side to finish the game. David Crawford, Joe D’Angelo, Shane Ramos and Joshua Hernandez each had hits for Odyssey.

WEBSTER SCHROEDER 2
MCQUAID 11
Drew Bailey connected on a three-run home run in the fourth as McQuaid (16-2) bounced back after Thursday’s loss to Schroeder (9-11). Bailey also had an RBI single in the first, going 3-for-4 with three runs. Noah Campanelli finished 4-for-4 with a pair of run-scoring doubles and scored two runs. Ben Beauchamp went 2-for-4 with a double and scored three runs. Charlie Merkley also had an RBI double in the third inning and scored a run. Hunter Walsh struck out nine over six innings and allowed two runs on five hits. Ben Conrow went 2-for-4 for Schroeder with an RBI, and Nick Vogt also had an RBI. Corey Spooner and Jack VonAhnen had a hit apiece.

SCHOOL OF THE ARTS 3
PENFIELD 9
Jack Josephson pitched a complete game and struck out seven as the Penfield Patriots (12-5) won for the sixth time in seven games. Josephson allowed three runs on seven hits, and closed out the last inning with just seven pitches to secure the win. Nathan Sobko went 2-for-3 with a two RBI single in the sixth inning and scored two runs. Ryan Novy went 2-for-4 with an RBI double in the sixth to score Nick Ianniello and a two RBI double in the fifth to make it 4-2. Ianniello and Connor Stuewe each had RBI singles and Stuewe added a run. Ezekial Randolph had two hits and three RBI for School of the Arts. Ross Janezic also had two hits including a double and scored two runs. They were able to keep it a close game until Penfield surged ahead with four runs in the bottom of the sixth.

BATAVIA 0
HONEOYE FALLS-LIMA 3
Derek Childs fanned six batters and surrendered just one hit over six innings as HF-L (13-3) won its fourth game in the last five to take the Monroe County Division IV title. Brian Reinke picked up the save in relief, striking out one. Sam Sallome had a hit for Batavia (9-7). Jake Humes struck out four batters and allowed just three hits despite the loss.

VICTOR 6
GREECE ATHENA 5
Santino Rosso hit a walk off home run in the bottom of the eighth to give Victor a narrow victory over Greece Athena. READ MORE

GREECE ARCADIA 4
AQUINAS 3
Kyle Blum fanned six over six innings of work to lead Arcadia (5-13). Sam Carducci picked up the save. Travers McNeal went 2-for-3 with an RBI. Nathan Yantz and Evan Caufield  went 1-for-3 apiece and added an RBI. CJ Mangone went 2-for-2 and recorded a triple for Aquinas.

RUSH HENRIETTA 2
SPENCERPORT 0
Michael Contini led Rush-Henrietta to back-to-back wins scattering four hits and striking out four in a complete-game effort. Andrew Sanchez hit a solo home run in the sixth inning and scored a run. Trevor Gineau went 2-for-2 including an RBI single in the second inning. Bobby Sellers went 1-for-2 and scored a run off Gineau’s RBI single. Frank McCabe, Grant Rodridguez and DJ White each had hits. Jason Nau pitched a solid game for Spencerport (8-11) despite the loss. He pitched the entire game, allowing just two runs off seven hits and struck out four. Mark Neu, Gino Pellet, Colton VanBrederode and Greg Ranieri each had a hit.

HILTON 6
GATES-CHILI 0
Dylan Boprey scattered five hits over six shutout innings, and Hilton (11-7) won its fourth straight game. Alex Noto finished 2-for-3 with an RBI. The Cadets leadoff man worked a base on balls to start the game, stole and scored on Jason Story base hit to give Hilton all the runs needed. Gavin Moore went 2-for-4 with an RBI and a run scored. Jackson DiPalma singled and scored two runs. Josh Battaglia went 1-for-3 with an RBI and a run scored. Drew HerrNeckar reached twice on hit by pitch and crossed home plate once. Kyle Douglas and Justin Kuebel had a hit apiece for Hilton. Darren Peace and Michael Ribis had two hits apiece for Gates-Chili.

C.G. FINNEY 8
FRANKLIN 10
Trailing 7-5 heading into the bottom of the fifth, Franklin scored three runs to come from behind for the second straight game. Greiram Ramos knotted the game with a two-run double, and Luis Lopez connected on the go-ahead single. The Quakers added two more runs in the bottom of the sixth. Nomar Quinones started and struck out nine and allowed four hits over six innings. Ramos tossed the seventh and struck out three including the final batter of the game with the bases loaded.

OAKFIELD-ALABAMA 1
AVON 12 (6 innings)
Nick Rowland struck out three and allowed zero runs over five innings of  two-hit ball as Avon (10-7) won its sixth straight game. Rowland went 2-for-5 with an RBI. Liam Culhane broke game open with pinch hit, two-run single in the fifth to make it 5-0 game. Nick Hall went 3-for-4 with two runs scored and three RBI. Aidan Ricotta was 2-for-3.

GENESEO 8
KESHEQUA 0
Jake Hamilton and Owen Lyons combined on a five-hit shutout as Geneseo (12-5/5-1) won its fifth straight and handed Keshequa (9-6/6-1) its first loss in LCAA3. Luke Harris went 2-for-4 with a pair of double and four RBI to pace the offense. Michael Walton finsiedh 3-for-3 with a double, an RBI and two runs scored. Liam Miscall walked three time and scored twice. Daniel Kelly was 2-for-4 with two RBI and a run scored. Evan Salvaggio doubled and scored. Lyons was 1-for-3 with a walk and a run.

LIVONIA 11
BOLIVAR-RICHBURG 1 (5 innings)
Shawn Minnehan struck out two and allowed two hits over five innings to pick up the win. Robbie Stewart finished 3-for-3. AJ Davin went 3-for-4  and drove in three runs. Nate Cole was 2-for-4. Jason Durra collected two hits in four at bats.

CALEDONIA-MUMFORD 4
LeROY 5
Kyler LaCarte connected on a walk-off single as LeRoy (13-4/6-1) rallied from a 4-2 deficit in the bottom the seventh inning. Ryan Friend finished 3-for-3 on the day and tied the game with a two-run single to set up LaCarte for the game winner. Tommy Saunders struck out 12 and allowed four hits over six innings. Cal-Mum used a two-out rally to  jump out to a 3 – 0 in the first after Eric Wilson and Ethan Pies singled, Jake Burnett was hit by a pitch and Joe Laursen drew a bases loaded walk. Ryan Carpino then reached base on an error.

MYNDERSE 9
MIDLAKES 6
Jeremy Porter allowed three hits over five innings of work to pick up the win. Jared King highlighted a five-run Mynderse sixth with a solo shot. Malakai Taylor drove in three runs with three singles. Jake Smith doubled, singled and drove in two. Griffen Herron had two base hits. The game was tied at three after five innings. Devin Hicks paced Midlakes going 2-for-4 with an RBI. Trevor Loney was 2-for-3.

RED JACKET 8
MARCUS WHITMAN 2
Dalton Hanline struck out seven over 4.2 innings to pick up the win. Jarrett Legault finished 2-for-4 with a triple, a stolen base, an RBI and a run scored. Hunter Williams went 2-for-4 with three stolen bases and two runs. Carson Miller led Marcus Whitman going 2-for-3 with a run scored. Dylan Howell walked twice and scored a run.

HARLEY ALLENDALE COLUMBIA 7
BLOOMFIELD 2
HAC’s (9-6) Henry Nicosia put together his third straight strong outing, going the distance on Monday afternoon against the Bloomfield Bombers (9-4). Nicosia struck out ten over seven innings and did not allow an earned run in his first complete game of the season. HAC was very opportunistic on offense, mixing in a few hits, walks, stolen bases and a sacrifice bunt to scratch out runs in four different innings.  The Wolves got out to an early 5-0 lead with three in the first and two in the third before Bloomfield cut it to 5-2 with a pair of unearned runs in the top of the fifth.  HAC came right back with a run on a RBI double by Jake Dockum in the bottom of the fifth and added another insurance run in the bottom of the sixth thanks to Max Brown’s hard RBI single past a Bloomfield defender. Brown had two of HAC’s four hits in the game, while Alex Sassaman and Dockum scored two runs each for the Wolves.  Calvin Rogers was 2-4 for Bloomfield with a run scored, RBI and triple.