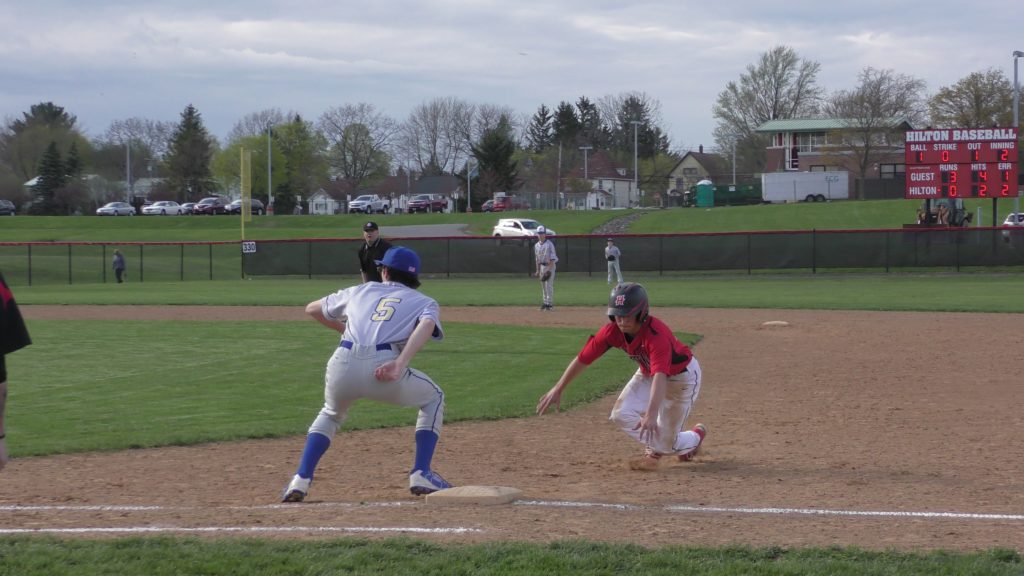 BROCKPORT 1
PITTSFORD SUTHERLAND 4
John Messina struck out five batters while allowing only two hits through six innings, giving Pittsford Sutherland the opportunity to break a one run tie in the bottom of the fifth. Keeghan Cummings and Torin Wilcox led the late-game offense both connecting on two-run doubles. Cummings, Aidan Pellegrino, Chris Pietropaoli and Robert Nolan scored a run apiece. Nolan finished the game on the mound, striking out one on nine pitches for Sutherland. Troy Liebert doubled in the fourth to drive in Nick Nealon for Brockport’s sole score. Liebert also led the way on the mound for the Blue Devils, fanning five over five innings of work.

PITTSFORD MENDON 3
BRIGHTON 5
Trent Wasserman struck out 11 over six innings and allowed three runs (one earned) on two hits to pick up the win. Nick Stodgell doubled and scored to break a 3-all tie in the sixth inning. Matt Falter added an RBI sacrifice fly later in the frame and finished 2-for-2 with a double and a run scored. Sam O’Hora went 2-for-3 with a double and a run scored. Jack Falter drove in a pair of runs with a single. Matt Falter struck out one and picked up the save with one inning of work. Andrew Bernacki and Kyle Hennessey had an RBI apiece to lead Pittsford Mendon. Cameron Blauvelt, Karthik Mathew-Malik and Jon Surtel scored the runs for Mendon, with Jack Keagle starting on the mound. Keagle allowed two runs on six hits over three innings. Eagle struck out two.

GREECE ARCADIA 2
GREECE ATHENA 5
RJ Vignari knocked in two runs with a double as part of a four-run fourth inning to lead Greece Athena (10-1) to its sixth straight win. Tyler Curtis led the inning with a single as the first seven Trojans reached base in the frame. Brandon Smith allowed two runs (one earned) on five hits over six innings to pick up the win. Jared Pignato struck out two in a scoreless seventh to notch the save. Casey Saucke II broke a scoreless tie in the third with an RBI single. Jorge Oropeza III finished the day with a double, an RBI and a run scored.  Jagger Nucci walked, scored a run and brought in another.  Jake Cerone and Jayson Russell scored a run apiece. Casey Amato and Sam Carducci drove in the runs for Greece Arcadia. Sam Carducci hurled three shutout inning in relief for Arcadia.

IRONDEQUOIT 9
GATES-CHILI 3
Chad Gartland struck out 12 and allowed one hit over five scoreless innings as Irondequoit (10-3) won its fifth straight game. Gartland led the Eagles attack at the plate going 3-for-4 with two doubles, a home run, three RBI and two runs scored. Frank Fernandes finished 2-for-3 with a home run, two RBI and a run scored. Nick Serce doubled, had two hits in three at-bats, scored twice and drove in another for the Eagles. Jaleel Davis singled and brought in two runs. Jackson DeJohn was 2-for-4. DeJohn hurled a scoreless inning in relief.  Devin Georgetti and Andrew Lipka had an RBI apiece for Gates.

FAIRPORT 6
VICTOR 1
Peyton Olinski broke a scoreless tie with a solo shot to lead off the fourth, and Fairport (5-8) won its second straight game. Olinski finished 2-for-4 with three runs scored.  Tyler Holmes went 1-for-3 and drove in the eventual game-winning run with a two-run single in the fifth as the Red Raid Raiders built a 3-o advantage. Josh Van Bramer struck out six and allowed one run on five hits over four and a third to pick up the win. Ryan Smith singled and drove in two runs for Fairport. Hudson Pavia and Matt Leonardo led the Victor offense with two hits apiece.

PENFIELD 10
RUSH-HENRIETTA 14
Andrew Sanchez and Chris Sleeper paced a Rush-Henrietta offense which collected 17 hits on the day. Sanchez finished 3-for-3 with a home run, five RBI and three runs scored. Sleeper tripled, drove in three scored four went and 3-for-5. Sleeper struck out five over five innings and picked up the win as the Royal Comets jumped to an 11-4 lead after three innings. Bobby Sellers doubled, collected an RBI and run scored while finishing 2-for-4.  Patrick Sherron had two hits and two RBI. Daniel Tirabassi, Frank McCabe and Trevor Gienau collected two hits and two runs scored apiece. Penfield’s Bobby Bradley finished 2-for-4 with a home run, three RBI and two runs scored. Peyton Pace had two hits and scored twice. Gage Ziehl walked twice and came around to score twice. Nick Ianniello doubled, drove in a run and scored another. Danny Stapleton went 2-for-3 with an RBI.

GREECE OLYMPIA 2
EASTRIDGE 24
Jayden Fayad finished 2-for-4 with a home run, two walks six RBI and four runs scored to lead Eastridge which built a 12-1 lead after three innings and doubled that score in fourth.  Brady Booher went 3-for-3 with two doubles, three RBI and two runs scored. Shane Harisis went 2-for-2 with two walks, two RBI and four runs scored. Caleb Delly, Kyle Egan, Jacob Russo and Avery Bowens drove in two runs apiece. Keenen Calenzo, Brendan Brown and Anthony Vasquez each had an RBI. Tyler Rogers allowed one run on one hit and struck out four over four innings to pick up the win. Delly closed out the contest, striking out three while allowing three hits and one run. Jack Berbert and Colin Avery led Olympia with an RBI each. Berbert and Mike Matteson scored the runs.

HONEOYE FALLS-LIMA 19
GREECE ODYSSEY 1
Hayden Smith fanned 12 and allowed two hits over five scoreless innings for Honeoye Falls-Lima (8-1) which rebounded from its first loss of the season. At the plate, Smith finished 2-for-4 with a double and two RBI. Brian Reinke tripled, doubled, drove in there and was 5-for-6.

CANANDAIGUA 7
WEBSTER THOMAS 1
Entering Monday’s game, Michael Sculli had allowed one hit in his last 20 innings of work. He allowed three in five innings against Webster Thomas at Basket Road on Monday. But he held the Titans to one run and struck out eight, including seven via his curveball. Sculli’s outing was still more than enough for Canandaigua (10-3) to pull out the win, a third-straight win after dropping three in-a-row last week. READ MORE.

CHURCHVILLE-CHILI 11
SPENCERPORT 5
Wes Colucci was 4-for-5 at the plate. The shortstop doubled three times, tripled, drove in a team-high four runs and crossed the plate twice. Colucci closed the game on the mound with 1 2/3 innings and a pair of strikeouts. Amaury Samalot went 3-for-5, connected for a hit in each of his first three at-bats and reached base four times. The senior catcher singled twice, doubled, drove in a run and crossed the plate twice as well. READ MORE.

WEBSTER SCHROEDER 6
HILTON 3
After allowing a leadoff double in the first then putting runners on the corners with one out in the second, Jack Willard settled in and retired 10 straight batters to pick up his first win of the season. READ MORE.

LEADERSHIP ACADEMY 18
EDISON TECH 6
Justin Morales struck out eight over three innings and Leadership Academy improved to 5-5.  Jaquez Cochran paced the squad at the plate with a double, a triple and five RBI. Victor Mercado and Hylander Candelario added three hits apiece for the Lions. Mike Braner led the Edison going 2-for-3 with two runs scored and two stolen bases.

NE DOUGLASS 7
SCHOOL OF THE ARTS 21
Justin Rodriguez and Reece Correa combined for 10 RBI to lead SOTA attack. Rodriguez tripled and drove in six while Correa doubled, singled and scored three runs. Ross Janezic collected three hits, scored four runs and drove in another. Zach Parsons had two RBI and two runs scored. Parsons earned the win on the mound, striking out seven while only giving up four hits.

SHORTSVILLE 2
GANANDA 6
Tim McClare scored two runs at the plate while striking out 17 during over six innings of lights out pitching for Gananda. McClare allowed only one hit and two runs on 105 pitches as Patrick Walsh (one RBI, one run scored), Zach Dier (one RBI, one run scored) and Zach Valetta (two RBI) jump started the Panthers’ offense with back-to-back productive innings to start the game. Zach Ciprich scored two runs and Shane Pickering drove in a run for Gananda, which led by five after the second inning. Ciprich finished the game on the mound, striking out two with no hits allowed in 12 pitches.

WAYNE 1
PALMYRA-MACEDON 4
Nick Sapeinza knocked a run in and scored one as well to lead Pal-Mac to a quick response against Wayne’s initial offense. Wayne led right from the get-go as Aiden Harris drove in Logan Holgado to take a one run lead in the first inning. Paul Goodness, Ian Goodness, and Mitchell Stopp all had an RBI in response for Palmyra. Alex Wootton, Liam Doyle and Noah Brooks scored in the first two innings. Ian Goodness struck out five and allowed one unearned run on five hits over six-plus innings of work. Logan Loveless hurled three shutout innings in relief for Wayne.

MYNDERSE 12
NEWARK 3
Nick Jones finished 2-for-2 with a double and an RBI. Phillip Jang was 2-for-4 with an RBI as Mynderse jumped to 7-2 lead and snapped Newark’s 24-game home-winning streak. Sophomore left-hander Jared King struck out five and allowed two runs on five hits over five innings to pick up the win. Newark (7-2) had not lost at home since the 2017 season.

LeROY 9
LETCHWORTH 8
Senior Tim McMullen struck out six and picked up the win in a complete-game effort. Tommy Saunders had a bases-clearing double.

YORK 2
KESHEQUA 5
David Cuozzo finished 3-for-3 with a run scored. Timmy LaGeorge scored a run and was 2-for-4.

BATH-HAVERLING 2
WAYLAND-COHOCTON 12
Jamie Carman started and allowed two runs on three hits over five innings to pick up the win. Connor Englert collected two RBI and a run scored. Carman had a hit, scored a run, drove in another and stole a base. Griffin Yastremski connected on a two-run home run in the top of the first to give Bath-Haverling the early lead.

DANSVILLE 3
HORNELL 4
Justin D’Amato finished 2-for-4 including a walk-off single to cap a three-run Hornell seventh.  Zach Miles was 1-1 with a double and three walks. Miles struck out six over 2.2 innings of relief and picked up the win.