Morton, Nazareth come out on top in close contest against Abraham Lincoln 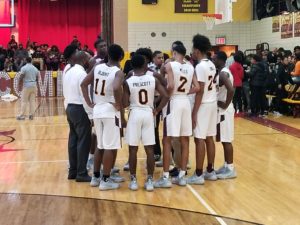 Fortunately, the foundation would already be waiting to welcome him with open arms at Nazareth Regional High School, 20 minutes away from Lincoln, in Brooklyn. The Kingsmen won the Class A sectional title last season and were primed to make another run. Coach Morton’s squad has won five of their first six CHSAA league games. But Saturday night, the “ambassador of New York City Basketball” got the opportunity to showcase his new home to a bigger audience, namely, his former squad, the Lincoln Railsplitters. In front of a packed house, Coach Morton and the Nazareth Kingsmen (8-4) emerged victorious over the Railsplitters (1-5), 70-68, in a heated Brooklyn classic.

Sophomore guard Tyreck Morris Junior swished the game-winning free throw with 23.7 seconds remaining for a 69-68 edge. Khalil Brantley netted 11 of the Kingsmen’s last 16 points of the game. The sophomore guard knocked down a three-pointer, three mid-range jumpshots, and a pair of free throws. Neither team was able to gain separation as the largest lead of the final period was four by the Kingsmen along with six lead changes and three ties.

Trailing 41-39 with 4:41 left in the third quarter, Morris sparked a 10-3 run with two dunks and a driving layup. Brantley hit a jumpshot and a floater for a 44-39 lead. The Kingsmen held the Railsplitters to a pair of missed field goals and three turnovers in seven possessions during the spurt.

Throughout the game, both teams combined for 21 lead changes and 11 ties.

Brantley finished with a game-high 21 points. Morris scored 15 of his 20 in the second and third quarters combined. Trailing 22-18 midway through the second, the sophomore guard netted seven of the Kingsmen’s last 15 points of the first half on two layups, including a dunk, and three shots from the charity stripe.

Sophomore forward Jaqai Murray had eight of his 11 in the second half on four layups.

For the Railsplitters, Tyler Hawkins scored eight consecutive points in the fourth quarter on two mid-range jumpers from the top of the key, a long-range shot from the right corner, and a free throw. The freshman guard finished with 15.

Senior forward Brian Stevens netted all 15 of his points in the first half, including six straight at the end of the second quarter on three layups. Deontay Sprattley had 12 of his 14 in the second half. The junior guard scored eight of the Railsplitters’ last 12 points of the third quarter.

Jaheim Williams (8), Justin Sutherland (6), Isaiah Benloss (5), and Tyler King (2) rounded out the scoring for the Railsplitters.