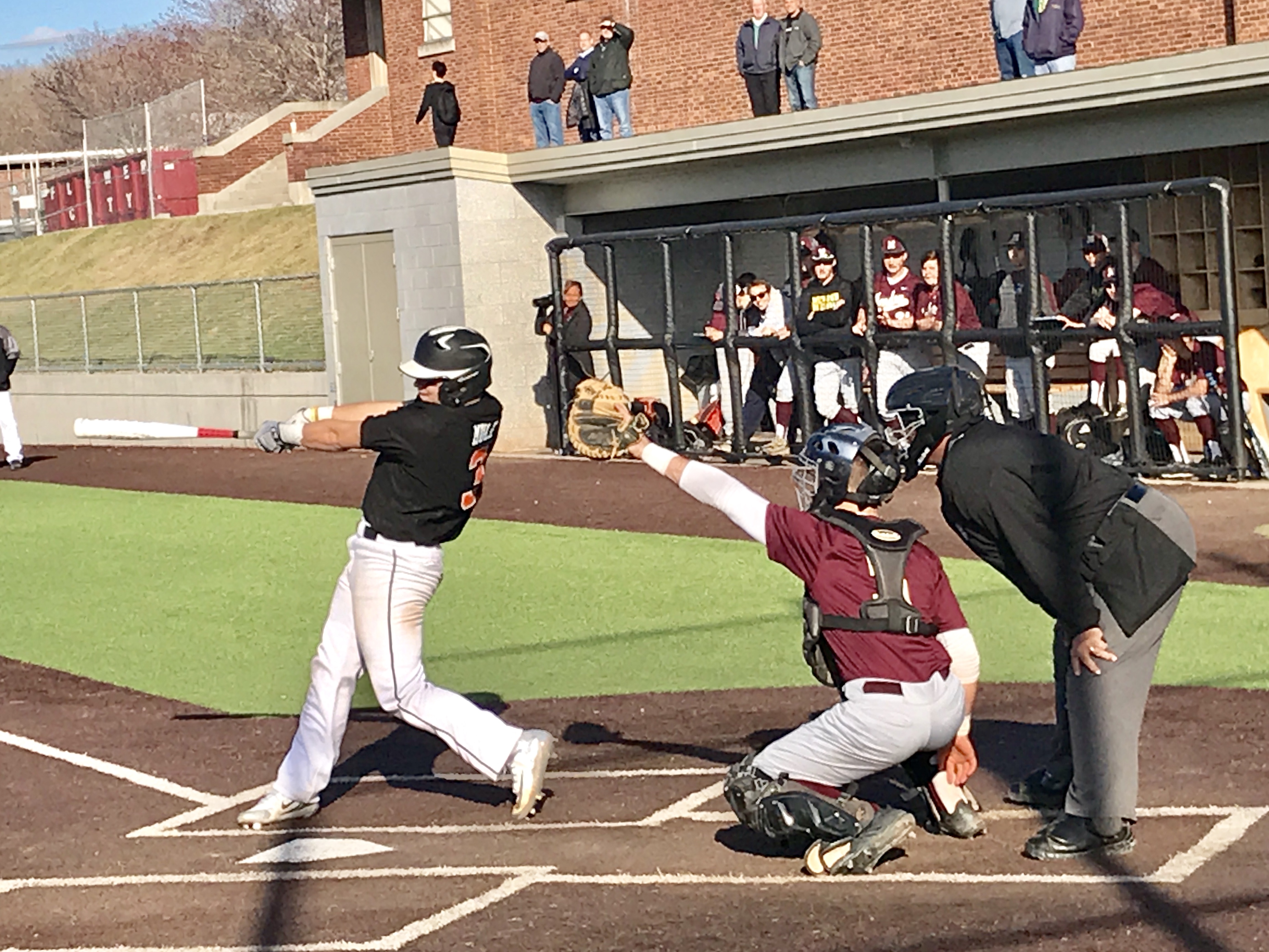 SPENCERPORT 1
EAST IRONDEQUOIT 0 (10 innings)
Jason Nau broke a scoreless duel with an RBI double in the top of the tenth inning to score Joe Moschettieri, and the Rangers won their first game of the season. Nau picked the perfect time to get his only hit of the game. After Moschettieri singled, Joe Carroll bunted him to second to set it up for Nau to be the hero. Ranger starter Gino Pellett struck out four, walked one and allowed four hits over seven innings. He faced six over the minimum. Nau hurled three innings for the win. The junior struck out one and allowed one hit. Eastridge’s Avery Bowens struck out six, walked five and scattered three hits over seven and a third scoreless innings.

VICTOR CENTRAL 4
FAIRPORT 5
Jake Schuler capped a three-run seventh inning with a walk-off sacrifice fly, and Fairport (4-5/1-2) won its first game in Monroe County Division I action. Trailing 4-2, Tyler Smith was hit by pitch. Omar Rosa singled, and both scored when Tyler Holmes reached on an error. Schuler delivered the game winner from there. Schuler also struck out six and allowed four runs (two earned) on five hits over seven innings for the win. Drew Delaney started and threw six innings for Victor before being lifted when he reached his pitch maximum. Delaney fanned two and allowed two runs on five hits. Rosa finished 3-for-3 for Fairport. Sam DiGiacomo plated Louie Schafer and Owen Delforte with a one-out single to give Victor a 4-2 lead in the top of the seventh. Schafer was 2-for-3 with an RBI on the day. DiGiacomo collected three RBI.

RUSH-HENRIETTA 3
MCQUAID 5
Erik Johnson allowed three runs (two earned) on five hits in a complete-game effort, and McQuaid avenged Saturday’s loss. Johnson struck out eight, walked one and retired 14 straight from the end of the first until allowing a one-out single to Raymond Specht in the sixth. The senior left-hander five of the last six batters in the game and struck out the side in the seventh. Ryan O’Mara drove in what would be the game-winning run with a sacrifice fly to score Ben Beauchamp in the bottom of the third inning. Noah Campanelli paced the McQuaid offense going 2-for-3 with a triple, home run, three RBI and a run scored. Specht had two hits for R-H. Nate Sanderson drove in a pair of runs with a triple as the Royal Comets scored three runs in the top of the first. R-H beat McQuaid, 6-1 on Saturday in a rematch of last year’s Section V Class AA final.

SCHOOL OF THE ARTS 12
GATES-CHILI 3
Ross Janezic, Reece Correra, and Miguel Made combined to produce ten of the Silverhawks’ twelve runs. Down 2-1 in the third, Made mashed a 2-out, 3-run triple to center field to give SOTA a 4-2 lead. He scored on a Brennen Johnson. Justice Salamone struck out 11 and walked three over six innings for the win. The SOTA starter three runs (two earned) on five hits. Gates-Chili’s Darren Peace 2-for-4 with a double and RBI.

NORTH ROSE-WOLCOTT 4
SODUS 6
Alex Savory struck out 11 and allowed one earned run on two hits. Vincent Orange-Paton went 2-for-4 with two stolen bases and three runs scored. Ray DeBadts was 2-for-4 with a double and an RBI.

WAYNE CENTRAL 6
EAST ROCHESTER 8
John Krautwurst finished 3-for-4 including an RBI single in the fifth as East Rochester scored four in the frame to erase a 5-2 deficit. Austin Mack went 3-for-4 with an RBI and a run scored for the Bombers. Mario Vega allowed five runs (one earned) on four hits over five innings for the win. Wayne’s Sean Flannery went 3-for-4 with two runs scored. Logan Holgado was 2-for-4 with a double, with two runs scored and an RBI. Tommy Bolt had two hits, an RBI and a run scored.

NAPLES 5
MARCUS WHITMAN 11
Parker Smith struck out 11 and allowed five runs (three earned on six hits). At the plate he finished 2-for-3 with four RBI and a run scored. Kyle Copper was 3-for-3 with a double and three runs scored.