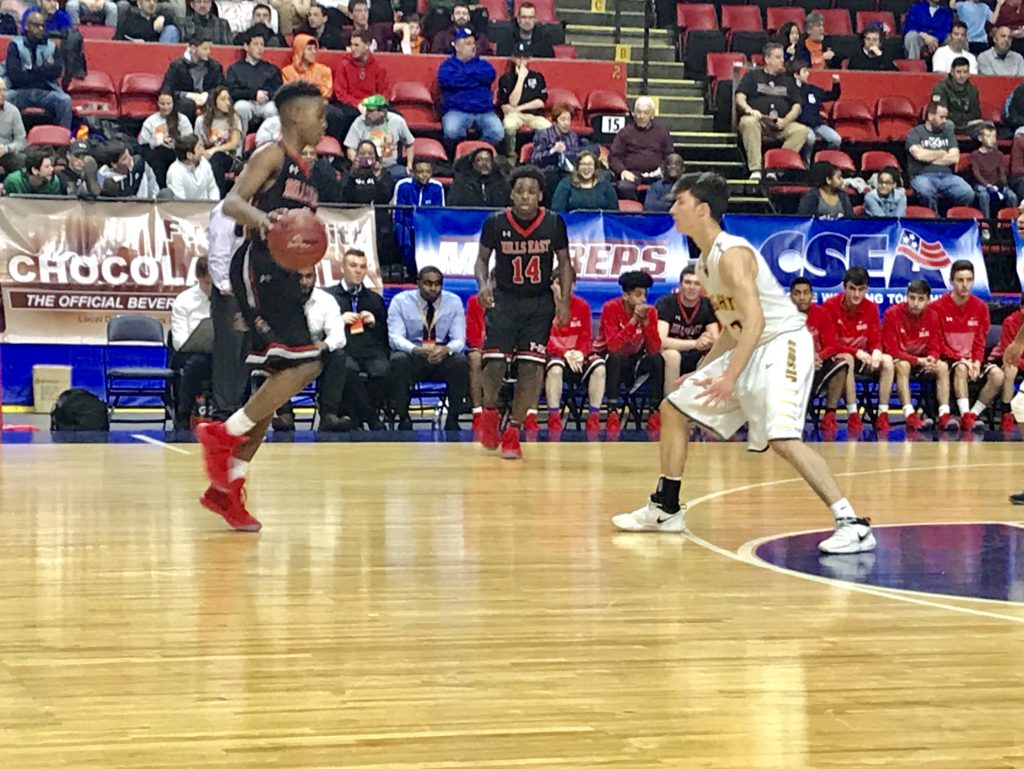 BINGHAMTON, N.Y. — It took the most decorated player in Half Hollow Hills East history to end the late-season run of the McQuaid Jesuit Knights.

“We were really hyped up,” said Lewis the Hills East all-time leader in points, assists and steals who was recently named “Mr. New York Basketball.” “The energy was there. We knew we had to do a little extra.”

Lewis finished a lay up in the open court and followed with a lay-in along the right side to spark a 13-0 Hills East run coming out of the locker room to turn a single-digit game into a 20-point affair.

The run came after McQuaid recovered from an early deficit to make it a four-point game late in the first half.

“We knew we had to answer back,” Lewis said. “We couldn’t trade buckets. We had to get stops.”

Trailing 30-19, McQuaid’s Connor Zamiara connected on a free-throw line jumper. Jermaine Taggart converted a pair of free throws and followed with seven more points. The sophomore guard hit a corner 3 to make it a 30-26 game.

McQuaid still trailed by four when Taggart finished in the lane for a 34-30 game.

“That run getting back into the game was kind of a microcosm of the season,” McQuaid coach Jack Leasure said. “There have been tons of opportunities to give up, and we didn’t. I can’t say enough about the effort.”

Half Hollow Hills East won the opening tap and hit their first three shots to score the game’s first seven points. Lewis hit a baseline jumper. Shane Dean drilled a corner triple, and Julian Crittenden connected on two of his 20 points to give the Thunderbirds a 7-0 lead.

“Our focus was to not back down, to not fold,” Leasure explained. “They’re a big transition team. They go in bunches like that. I wanted to give us a chance to show we could respond, and we did.  We got back in it. We made a really good push in the second quarter.”

But McQuaid could not recover from Hills East’s third-quarter push, and the Knights trailed 59-47 going into the fourth quarter.

“It was one of those games,” Leasure added. “We didn’t shoot it all too well. We didn’t defend in transition all that well; our not shooting well contributed to that.

“It’s really a footnote to how special this run was. It’s hard right now, but that was an unbelievable effort to rebound from that 4-7 start and get to this point.”

Harry Bruu came off the bench and gave McQuaid a spark with six points late in the first and early in the second quarter. The junior guard also took a pair of charges during a 6-0 McQuaid spurt.

McQuaid’s Anthony Iglesia led all scorers with 21 points. Taggart had 16. Zamiara finished with 12.

McQuaid (16-9) was making its first appearance in the state semi-final since 2003 when the Knights defeated Mount Vernon, 57-50 in a battle of undefeated teams.