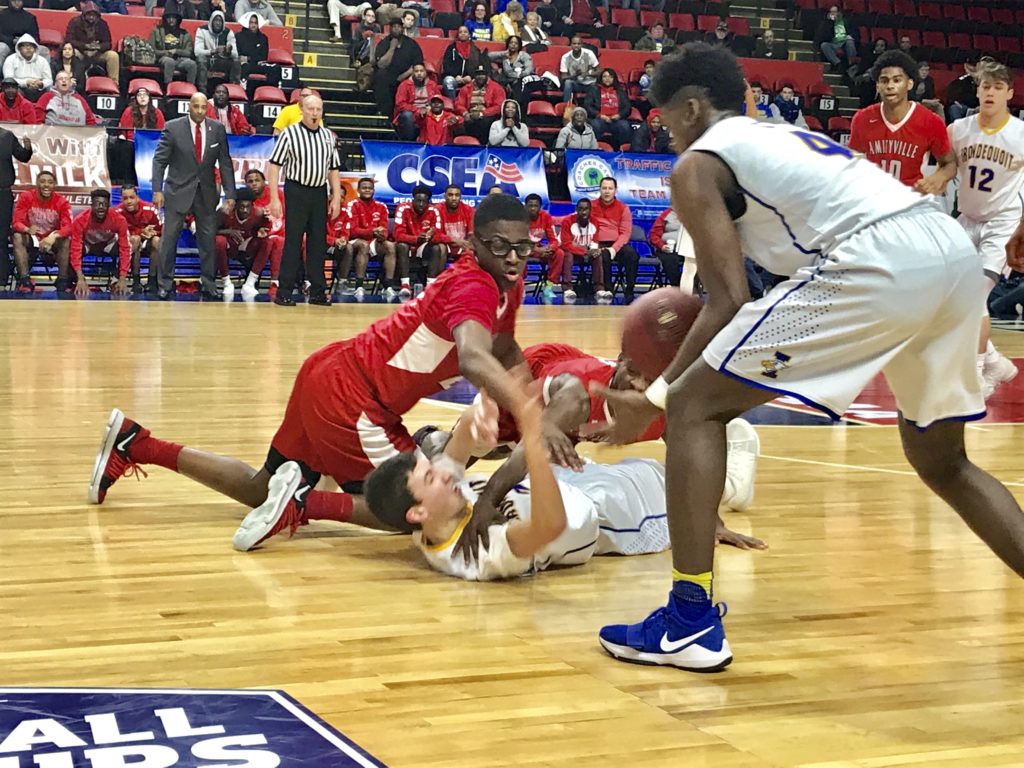 Serrano, Amityville’s leading scorer during the regular season averaging 26 points per game, connected on a pair of 3-pointers and finished underneath with a reverse layup as Amityville erased a late deficit.

Fittingly, a Braden Tannis rebound and putback with 4:12 remaining in the contest gave Amityville a lead it did not surrender at 38-37.

“The real key to the game was they rebounded better in the second half,” Irondequoit coach Chris Cardon said. “If you’re giving up second shots and they’re becoming easy shots, it’s going to be a problem.”

Serrano followed with a 3-pointer from the left wing. Two possessions later, the senior guard pushed the advantage to seven with another three ball.

“Everybody feeds off each other,” Amityville coach Gordon Thomas said. “We have great chemistry. We’re here. We have one more game.”

Serrano scored 13 of his game-high 22 points in the second half when the Warriors held Irondequoit to 19 points.

“We went into the locker room at halftime and we got together and said we got to play good defense, team defense,” Thomas said. “That’s what made the difference in the second half.”

Frederick June, Jr. and Josh Stenglein combined for 14 first-half points as Irondequoit took a 23-18 lead at the break.

June drilled a triple on an inside/out feed from Gerald Drumgoole for a 9-7 Eagle lead late in the first quarter. Stenglein followed two trips later with a catch-and shoot 3 off a sideline out-of-bounds play for a 12-7 IHS lead after eight minutes of play.

Stenglein gave Irondequoit its largest lead of the game at 16-9 midway through the second quarter with a drive from just inside half court.

Gerald Drumgoole converted one of two from the free line. June connected on a pull-up trey and found Robert Diaz-Judson underneath for a layup as Irondequoit closed the half on a 6-0 run to take a 23-18 lead into the break.

“What it comes down to in the first half I thought we turned the ball over too much,” Cardon said referring to the Eagles nine miscues during the first 16 minutes and 15 overall. “We probably could have had a 15-point lead at half. In the second half shots aren’t falling.

“They’re getting second shots, and they’re getting decent shots. I thought we defended well. We held them under 50 until near the end. We didn’t lose because of our defense. We had too many turnovers.”

Gerald Drumgoole gets the hurt and harm for @WIEagles pic.twitter.com/UiaNfuplaH

“We had a bullseye on our back all season,” Cardon said of his Eagles who took the 2017 NYS Class A title. “There were very few people that realized we only brought one starter back and Freddie was the sixth man last year. That was it. To get out of our bracket was really tough and then we played an undefeated team in the state.”