VICTOR (5-10) 64
PENFIELD (7-9) 61
Joey Colyer connected on two of his six 3-pointers in the second quarter as Victor outscored Penfield 15-8 to take a nine-point advantage into the break. Colyer finished with a team-high 20 points. Caleb Clow added 13, and Charles Nwugwo hit two 3-pointers and had 10 points for the Blue Devils. Penfield’s Dyllon Scott scored eight of his season-high 31 points in the third quarter as the Patriots cut the deficit to three at 44-41 going into the fourth. Javion Monroe and Bryson Scott scored 13 apiece. Penfield played without leading scorer Isaiah Preston. Other scorers: Penfield – Taylor (3) and Xavier Williams (1). Victor – Matt Caggiano (6), Jack LaRue (4), Jeremy Summerson (2), Jon Crowley (2) and Tanner Hay (7).

Eric Lewis hits the game winner with an acrobatic shot with 5 seconds left to lead the Saints over Arcadia 49-48 tonight. pic.twitter.com/APvYHOuZlm

BRIGHTON (2-12) 72
BROCKPORT (4-11) 56
Jack Falter led Brighton with a season-high 23 points on the evening, including seven three-pointers. Ryan Martin added 20 points for Brighton, while Kendall Clyburn had 15. Brighton outscored Brockport in all but one of the four quarters, with the exception being a 19-18 third quarter in favor of Brockport. Cory Gross led Brockport with 17 points, his season-high, while Noah Schultz contributed a season-high 16 points. Gross and Schultz combined for 14 points in the third quarter. Other scorers: Brighton- Najeeb Awad (5), Will Brownell (5), Sam Gosselin (2), Jasper Newman (2), Brockport- Willie Ball (8), Jake Juhrs (8), Alex Trostle (5), Ishmael Hannah (2)

LEADERSHIP ACADEMY (13-0) 87
VERTUS (2-12) 55
Dezmere Ellis scored 14 of his Leadership-leading 28 points in the first quarter, helping his team jump out to a 25-13 lead to open the game. Davon Brown added 14 points for Leadership, NYSSWA Class A No. 13 including seven in the second quarter, while Rondell Watson had 11 on the evening. Leadership scored over 20 points in three of the four quarters of play, with the exception of the fourth quarter when both teams scored 18 points. Eric LeBrane topped Vertus with 21 points, followed by Myles Rose with 17, 13 of which came in the second half. Other scorers: Leadership- Shaheem Britt (7), Nate Doyle (6), Shamir McCullough (6), Tyler Banks (6), Lee McKnight (4), Onaejae Anderson (3), Marcus Barr (2), Vertus- Jahmel Demery (9), Jabez Thompson (4), Davion Terry (2), Amauri Smith (1), Desmond Brown (1).

BLOOMFIELD (6-8) 52
MARCUS WHITMAN (12-2) 54
With time winding down and the game tied, Jon Donovan charged down court and found Ben Stone near the basket with space, allowing Stone to lay the ball in for the game-winning shot with three seconds remaining. Donovan  led Whitman with 15 points and seven assists, followed by Riley McLoud with 14 points and nine rebounds, and Liam Prendergast with 11 points. Whitman created a cushioned lead by outscoring Bloomfield 34-13 between the second an third quarters, allowing them to hang on for the win despite being outscored 25-12 in the fourth quarter. Patrick Geitner and Tanner Kimball tied for the team lead in points for Bloomfield with 17 apiece. Other scorers: Whitman- Stone (7), Hunter Commisso (4), Tim Cornish (3), Bloomfield- Devin Campbell (7), Alex Roach (5), Trevor Farrell (3), Mitchell Bliss (3)

HAC (9-4) 56
HONEOYE (7-7) 49
HONEOYE — HAC’s Ryan Hilton scored 21 points, grabbed 24 rebounds and blocked six shots to pace the Wolves to a gritty, 56-49 win over rival Honeoye in Finger Lakes West action Friday night. It was HAC’s fourth consecutive victory. Hilton, who also hit 14-of-15 free throws — including all 11 in the fourth quarter — dominanted the glass on both ends of the floor. His 21 points were complimented by Xavier Israel’s 17 points. Israel was pressed into duty at the point due to illness on the team. HAC outscored Honoeye 19-6 — until a three pointer at buzzer by Jon Viera — to come from behind and earn the victory. It sealed the season sweep over the Bulldogs. Honeoye was led by Jon Marble’s 28 points. Marble led the charge back from a 10-0 HAC lead in the first few minutes to push the Bulldogs into striking distance. The quarter ended with HAC up 12-9. In the second quarter Honeoye took the lead on a short Marble runner 16-14, but Kyle Lacey hit wide open three pointer to give the Wolves a 25-20 lead with less than 2 minutes left in the quarter. HAC sprinted into halftime with a 30-25 lead. HAC came out flat in the third quarter and Honeoye had balanced scoring by Marble, Max Yale, Tyler Rudolph and Viera pushed The Bulldogs to a 40-37 lead after three. In the final stanza, the Wolves took the lead for good at 45-44 with two soft floaters down the lane with less than 3 minutes left. After that it was all Hilton who hit the Wolves last 10 points from the free throw line to seal the win. The win pushed the Wolves to a 9-4 overall record (6-3 league) and helpd them keep their league title hopes alive as they trail undefeated Marcus Whitman. HAC hosts Marcus Whitman next Wednesday in a huge matchup. Honeoye fell to 7-7 overall, 5-6 in FLW. Yale finished with 10 points while Viera had 7. Rob Dorsey finished with 7 points, Jin with 6 and Lacey with 5. HAC is off to their best start since 2009.

GENESEO (5-9) 58
YORK (8-6) 56
York held possession with 11 seconds remaining and a chance win the game with a basket, but Daniel Kaye took the ball from Matt McFarland and streaked down the court, eventually drawing a foul on his layup attempt. Kaye then stepped to the line with two seconds left and sank both free throws to give Geneseo the win. Kaye led Geneseo with 17 points, followed by Giovanni-Cicoria Timm with 10 and Luke Harris with eight. Leading by up to 22 in the second half, Geneseo was able to get the win despite a York onslaught that saw them outscore Geneseo 25-12 in the third quarter. Dylan Zambito topped York with 21 points and five rebounds. Walker Major added 18 points, while McFarland posted a double-double with 11 points and 11 rebounds.

WELLSVILLE 48
GREECE ODYSSEY 53
Travon Harper scored eight of his 16 points in the fourth quarter as Odyssey pulled away late for its fourth straight win. Harper added six assists in the game to help the Leopards to their third win of the week. DJ Billings added 10 points. Jaden Hartsfield had eight while Aric Williams collected seven points and eight rebounds. Max Jusianiec connected on five 3-pointers and scored 23 points to pace Wellsville. Joe Tronetti added 11. The game was tied at 33 after three quarters.

NIAGARA FALLS (VI) 68
AQUINAS 55
Sophomore Tyler Warner hauled in a game-high 11 rebounds to go with eight points, but it was not enough as Aquinas fell behind early and could not come back. Fellow sophomore Kidtrell Blocker finished with game highs of 16 point and five assists. Sam Kelly collected nine points and eight rebounds for the Li’l Irish (3-10). Quaran Dubois paced Niagara Falls (11-3) with 15 points, three assists and six steals. Willie Lightfoot had 12 points and Tazaun Rose. 10. Niagara Falls converted 22 Aquinas turnovers into a 28-9 advantage in ballhandling miscues. NF led 15-13 after the first quarter and held the advantage for 27:51 of the game. Aquinas grabbed 16 offensive rebounds and won the battle of the boards, 41-27. Other scorers for Aquinas: Justin Johnson (3), Luke Putnam (6), Danny Speed (4), Ruben Torres (2), Jack Scanlon (5) and Steven Mahar (2).

CANISIUS (VI) 78
BISHOP KEARNEY 74
Anthony Gray scored nine of his 17 points in the third quarter to help Kearney grab a five-point advantage going into the final stanza, but the Kings could not hold the lead. Shykell Brown added five of his team-high 24 points in the third, and Jamal Fennell had six of his 18 coming out of the locker at halftime. Kevin Goode, Jr. chipped in 10 points for the Kings. Dewayne Vass converted a three-point play in the closing seconds to break open a tie game for Canisius. Nick Macdonald connected seven times behind the 3-point arc to pace the Crusaders with 21 points. Ryan Bradley had 16 points.

CLYDE-SAVANNAH 62
SODUS 50
Marcus Chance finished 7-of-7 from the free throw and led Clyde-Savannah (12-3) with 19 points. Dru Carnevale his a pair of 3-pointers and converted all three of his free throw attempts to add 16. Lonnie Logins led Sodus (7-6) with 23 points.

PEMBROKE 56
ELBA 47
Pembroke remained the only undefeated team in Section V at 13-0. 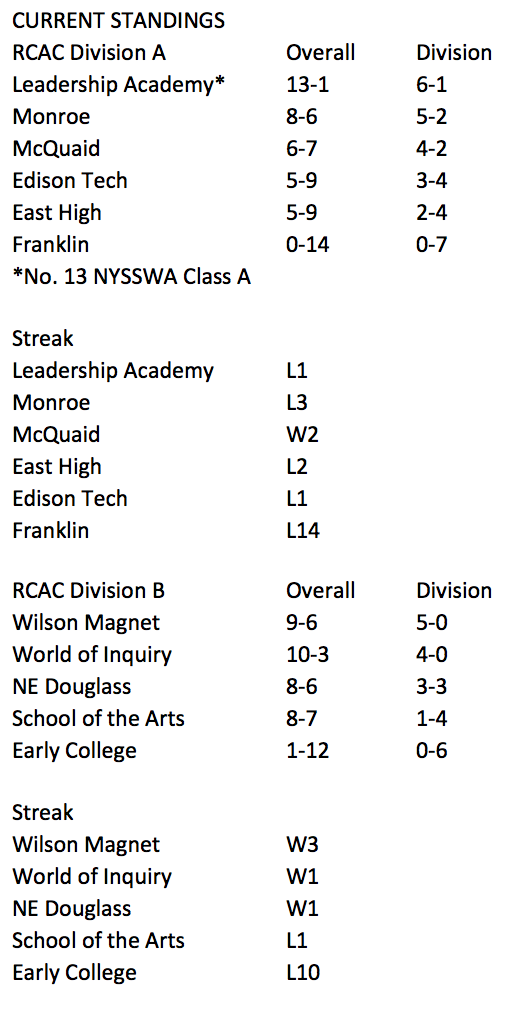 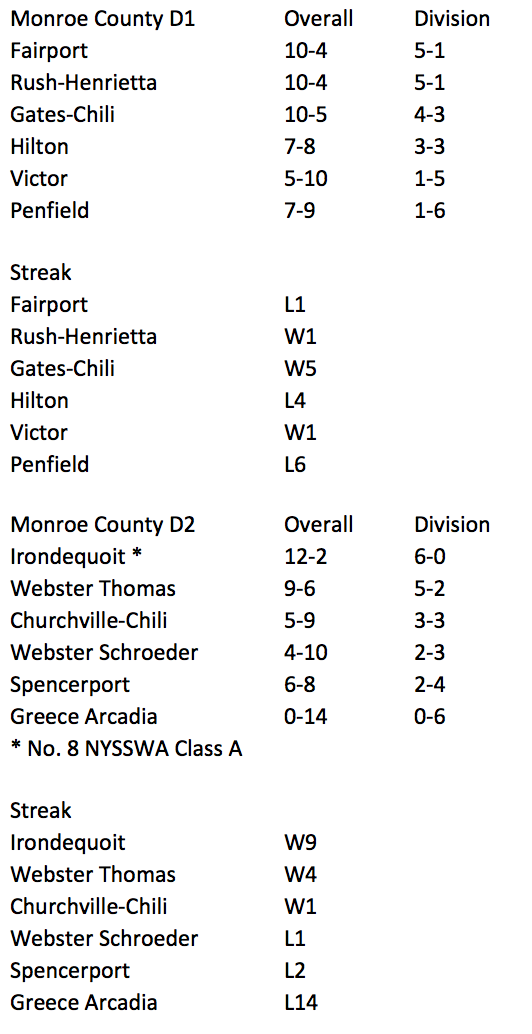 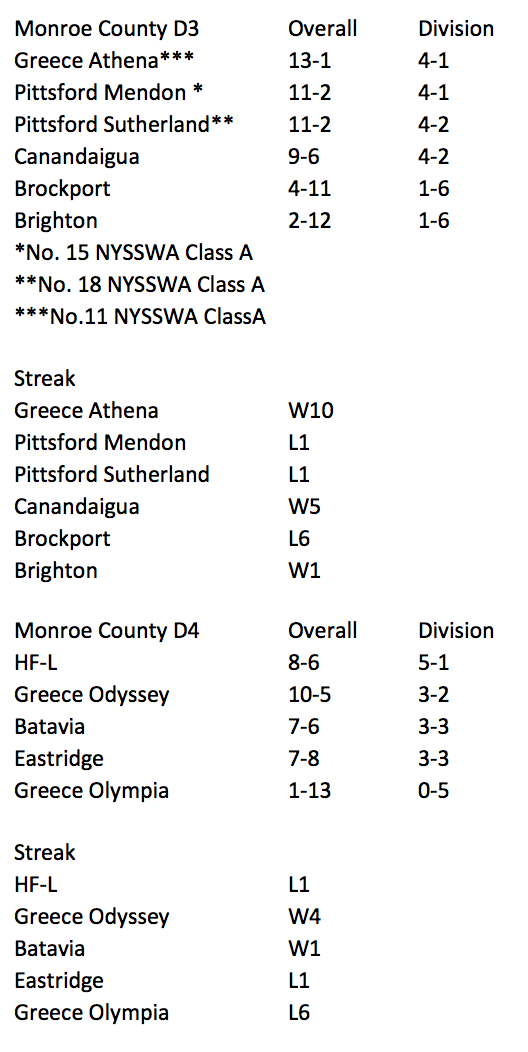 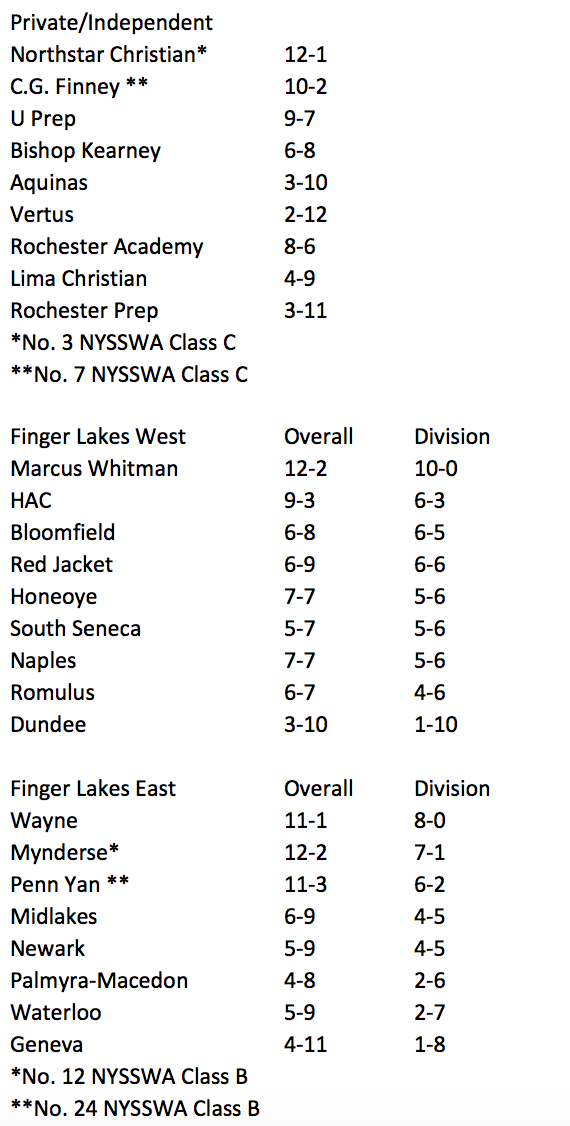 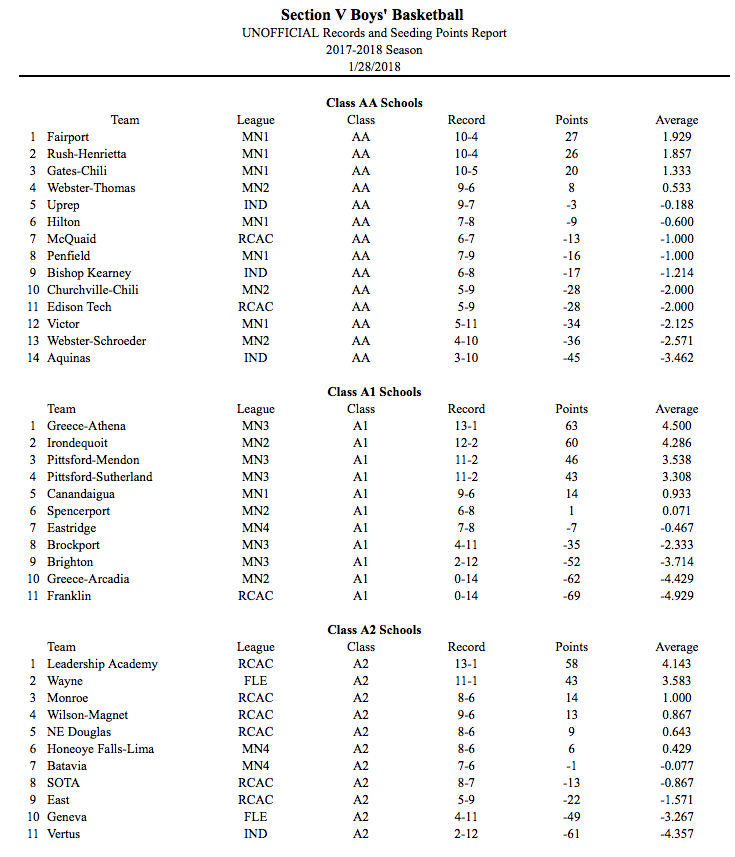 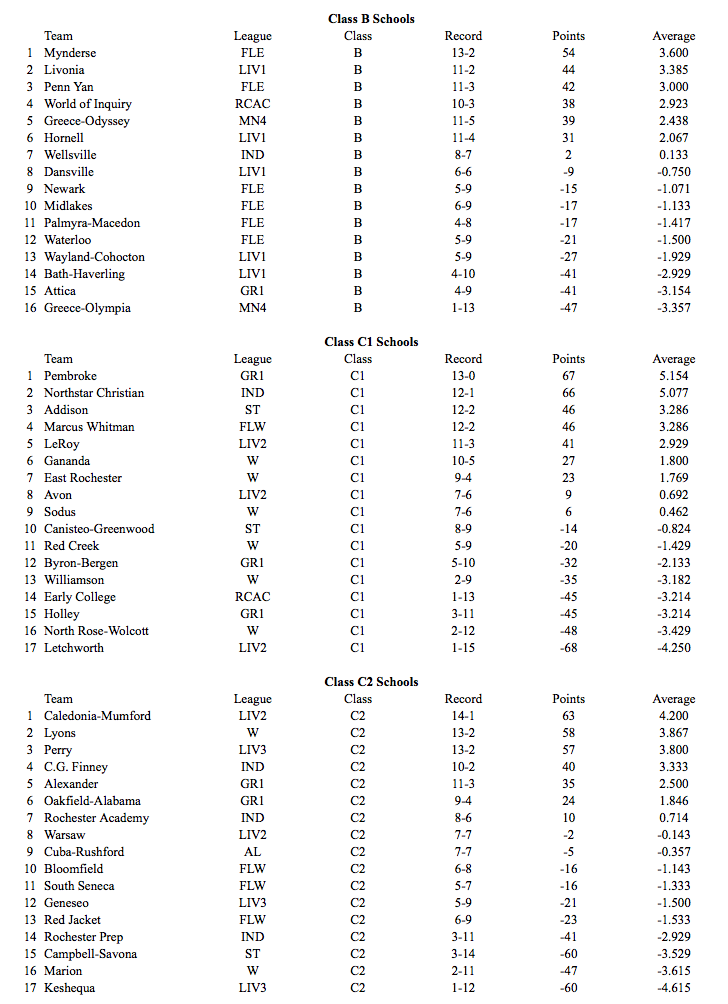 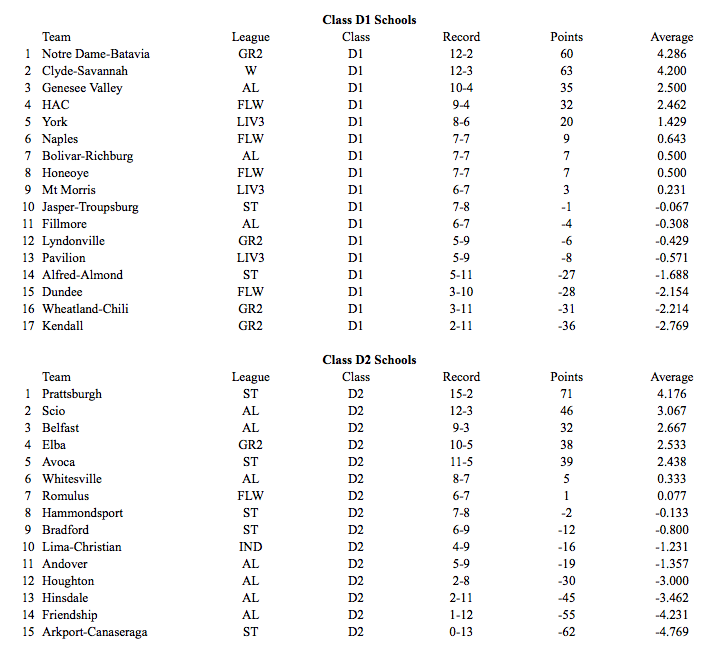