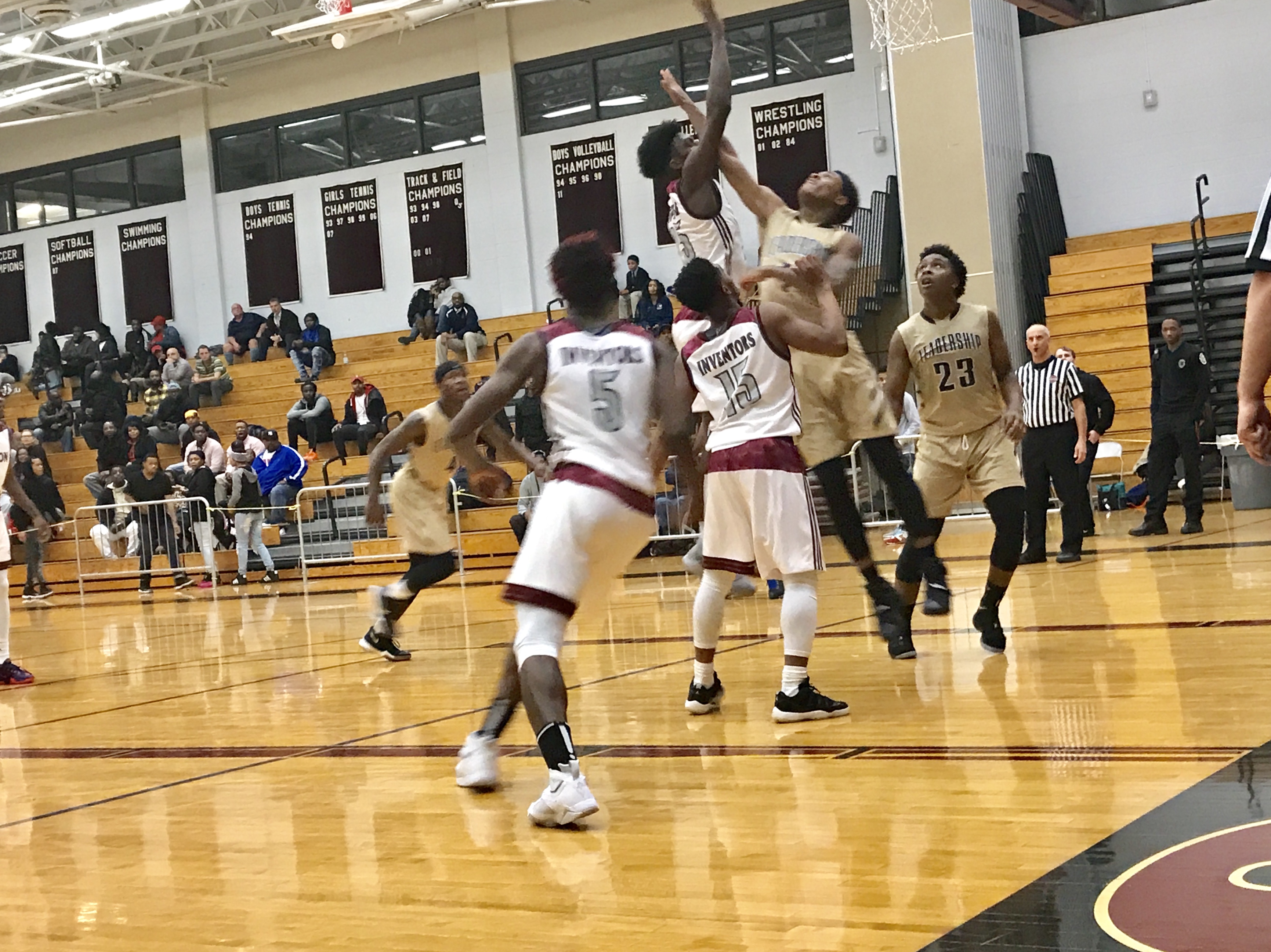 ROCHESTER, N.Y. — Less than seven minutes remained in an 11-point game Tuesday night when Leadership Academy’s Davon Brown was turned away twice by Edison Tech’s Tristan Flowers at the rim. A look of dismay came over Brown’s face.

Then the ball squirted through a tangle of arms and legs inside the lane and ended up at the 6-foot-4 forward’s feet. Alertly the senior corralled the loose ball and finished off the glass.

Such was the night for Leadership Academy. A number-one seed in Section V Class A2 a year ago, the Lions were not to be denied in RCAC Upper Division action.

“They were able to keep it together,” fifth-year coach Reggie Simmons said of his squad. “Our attitude, our hustle and our will to never give up when we were under stressful situations especially in that fourth quarter. We stuck it out. I’m proud of the guys”

Senior Dezmere Ellis led three in double figures as Leadership held off a late rally for a 66-59 victory over the Edison Tech Inventors.

Ellis scored nine of his game-high 22 points in the second quarter as Leadership turned a three-point edge into a 10-point advantage going into the locker room.

It’s only the second game of the year, but it’s clear where the Lions have their focus.

“Most of all it’s getting our W and getting our sectional points, so we can go into sectionals looking good,” Ellis said. “Hopefully we can get the number one seed again this year. We’re going to go from there.”

Desmere Ellis finds Davon Brown for the hurt and the harm. #RCAC pic.twitter.com/U9lINkQZ0V

The senior point guard repeatedly drove the paint throughout the fourth quarter and converted on six of eight free throws to seal the victory.

“My man was playing me like I wasn’t quick off the bounce,” he said. “I just went at him. I attacked him. I got to the rim.”

With Ellis slashing the paint throughout the contest, three Lions combined to connect eight times behind the arc.

Nate Doyle came off the bench in the first quarter and drilled a long three from the right side of the floor to knot the game at seven. The lefty gave Leadership a lead it did not surrender with another bomb for a 15-13 advantage. The junior guard’s third trey made it 23-15 with just over seven minutes to go in the second quarter.

“We practice them every day,” Simmons said of the success behind the arc. “It’s a huge part of our offense, and I’m so proud after the first game our guys were very hesitant in terms of our shooting. But today they really stepped it up.”

Rondell Watson connected three times behind the arc in the first six possessions of the second half to give Leadership its largest advantage of the night at 49-30.

“Go and pop out; we practice it all day,” Ellis said of Leadership’s ball movement and player movement that creates space for open looks.

But Edison Tech did not go away. After opening the second half trapping the corners out of a 2-3, the Inventors went 1-3-1 zone before settling into a man-to-man which disrupted Leadership’s rhythm.

“We made so many mistakes to put them back in the ball game,” Simmons noted.

Flowers followed Ryziere Wilson’s layup attempt with a tap in to make it a six-point game at 61-55 with under two minutes to go. Dylan Foster went end-to-end for a bucket with 18.7 remaining to make it 63-59, but the Inventors could not get any closer.

“We have a lot of things to work on, but I’m so proud of them for hanging in there when things got stressful at the end,” Simmons said.

Brown finished with 18 points and 12 rebounds for Leadership. The senior forward who had most of his offensive production a year ago inside the paint, connected twice from behind the arc Tuesday night.

“Last year I had to play a role,” Brown said. “I was the big man. You got to play your role some years when your team needs it.

“It brought a lot of momentum to the team,” he said of the three-point attack. “The crowd was good. The team was energized.”

Watson chipped in with 13 points. Ellis handed out nine assists.