Davidson sprints out to double-digit lead over Dayton at half 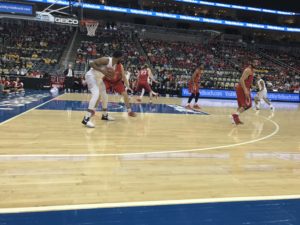 PITTSBURGH, PA. — Jack Gibbs netted four of his 17 first-half points during an early 11-2 Davidson run, and the Wildcats took a 37-25 lead into the locker room.

Gibbs got Davidson on the board with a curl, catch and drive in the lane for two. The senior guard followed with an upfake and drive on the next possession to give Davidson a lead it did not surrender for the remainder of the stanza.

Gibbs connected on a pull-up 3-pointer over a ball screen to give Davidson a 35-19 lead late in the half. With the trey, he eclipsed the 2,000-point mark for his career.

Peyton Aldridge added 10 points on 4-of-6 shooting for the half. Gibbs hit 6 of 10 shots, and the Wildcats connected on 13 of 26 from the floor.

Dayton beat Davidson, 89-82 in overtime on February 24th at Belk Arena. A game that Davidson led 70-57 with 7:43 remaining in regulation. The winner gets the St. Bonaventure and University of Rhode Island winner.