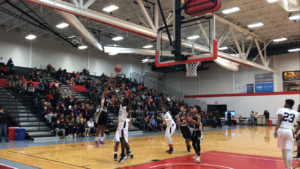 ROCHESTER, N.Y. — When they met earlier in the season, Rush-Henrietta trimmed a 21-point UPrep lead  to seven before finally succumbing in the final seconds. Saturday night there was no dramatic fourth quarter comeback.

Jeenathan Williams scored six of his game-high 27 points in the third quarter as UPrep took a double-digit lead into the final stanza on their way to a 62-39 victory in the Class AA quarter-finals.

Leading by three, the Griffins doubled up R-H over the final seven minutes of the third quarter.

“We didn’t want to lose,” James Reaves said of his UPrep Griffins. “We played to win.”

Williams finished on the break with a pass from teammate James Barnes. His pull-jumper in transition made it a 38-28 game. Williams scored again on the break and capped UPrep’s quarter at 43-33.

Rush-Henrietta did not get any closer.  The Griffins opened the fourth quarter on 13-4 run to put the game out of reach.

“They gave us a good hard-fought game,” Reaves said of the Royal Comets. “For us, all year we’ve been a team of ups and downs. We turned the switch on toward the end.”

R-H led early in the first 12-11 when Williams scored six straight. The junior guard/forward delivered a thunderous hammer dunk in the open floor. He followed with a blocked shot on the defensive end before going the length of the floor for two more. His pull-up jumper made it 17-12 after the first quarter. They did not trail again.

UPrep, which had not played a game since February 7th before dispatching Churchville-Chili, 79-41 in Wednesday’s opening round, pushed their advantage to 13 in the second quarter.

Barnes nailed a three from the right corner. Jabez Thomas had a putback slam, and Barnes connected again behind the arc. Williams finished on the break. UPrep led 29-16.

“We’ve been beating up on each other, but you can’t really simulate the game,” Reaves said of team’s practices. “We were a little rusty, but a little rested. Now we’re kinda getting into the groove.”

Rush-Henrietta’s Kailee White scored on a drive from the wing to cut the lead to five at 29-24 going into the locker room. White hit a free throw line jumper early in the third to make it a three-point game.

It was as close as Rush-Henrietta got for the remainder of the game.

“I got a chance to see a little bit of their game today on Facebook live,” Reaves said. “Scrappy team. Of course, they’re big. We’re big too. Matchup-wise it works. It should be a good one. Looking forward to it.”

UPrep beat Rush-Henrietta, 59-51 in the Rush-Henrietta Christmas Tournament. A game in which UPrep led 46-25 at the start of the fourth quarter.