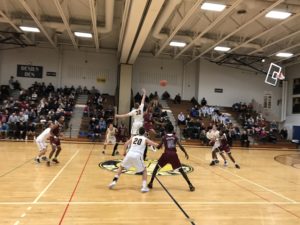 Tuesday night, though, the Inventors played like they were from Missouri.

For ninth-year head coach Jacob Scott it was time to stop talking and start performing, and the Inventors played like the slogan of the “Show-Me State.”

“I can say all the words I want in pre-game and in practice yesterday, but it’s show time or no time. I say to the guys ‘don’t tell me about how we should do this better.’ We got to see it. Don’t tell me; show me. Guys stepped up and showed me today.”

Holland drilled back-to-back triples midway through the first quarter and turned a four-point game into a double digit affair as Edison sprinted to a 27-13 advantage after eight minutes.

“He has the license on my team to shoot,” Scott said of the senior guard. “He’s worked hard for it. He gave us a really good cushion today.”

Holland stopped an 8-3 Blue Devil spurt with his first trey of the night. One possession later, he drilled a heat-check dagger from 25 feet.

“He’s our shooter,” Scott noted. “You got to let a shooter shoot. I don’t come down on any of the guys for shooting. I almost get on him more because he doesn’t shoot enough.”

Holland finished with seven triples on the night to lead an Edison attack which connected 12 times from behind the arc.

“That’s my shot,” Holland said. “My coach pushes me, makes me work hard. If I miss two, he tells me to keep shooting.”

The momentum carried over to the defensive end where the Inventors forced nine first-half turnovers and held Victor without a field goal for more than six minutes.

“We had to get the monkey off our back,” Scott said referring to the losing skid. “We stressed defense.  Anything less than that is just not Edison Tech basketball.”

Marique Simkin scored seven and handed out three assists in the first half. The senior guard’s steal and layup made it a 24-12 game.

“Coach told us to come out and play our hearts out and have fun, so we did,” Simkin said. “We were just playing as a team, playing defense, talking and moving our feet. That’s all we do. Stay together as a team.”

Felipe Carter’s second trey gave Edison its largest lead of the night at 41-19, and the Inventors took a 41-24 advantage into the locker room.

Victor rallied in the second half.

“Michael is a big component of our offense,” Victor coach Kevin Downey stated. “He had a little foul trouble in the first half. Second half we came out strong. We just told them at halftime we wanted to come and battle for the next 16 minutes and see what happens.”

Novitsky scored on a trio of inbound plays. He converted a traditional three-pointer and followed his own miss one possession later. His finish under the basket made it a 44-36 game.

“There was more of a conscious effort to be aggressive and go for seals and put the ball inside,” Downey explained. “I told our team  the outcome of this game is going to be who plays their brand for longer. Obviously, they (Edison) did. We did it in spurts.”

Holland’s three-pointer late in the third stanza pushed the Edison lead back to double digits at 51-40.

“We know going into every single game that we can compete, but also be beaten,” Downey added. “Tonight, I didn’t feel like we had the same passion or energy. They had more of it, and we didn’t.”

Holland took an inside-out feed from Chaz McKinney and nailed a three ball. He converted two free throws and put the game on ice at 63-46 connecting on a catch-and-shoot three with an assist from Simkin.

“He’s a knock-down shooter,” Simkin said of his teammate. “If we have a last shot in a game, I trust him.”

Simkin finished with 13 on the night. Carter added eight, and McKinney had six.  Edison improved to 8-7. The Inventors host Penfield Wednesday night.