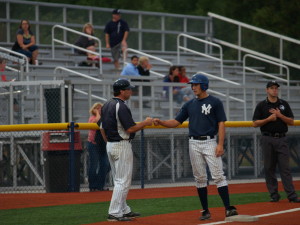 Four years in the making Dave Brust got his just due. The New York Collegiate Baseball League announced its post-season awards, and the Webster skipper nabbed the top honor.

“It means a lot when your peers see what you’re doing,” Brust said of the award voted upon by the league’s coaches. “I’m very proud of it.”

“There’s no secret,” Brust added. “I was blessed with players, but that is the result of the years of development.”

Webster finished the campaign strong. After starting the season 4-4, the home nine went without a loss for 15 days in late July to take the NYCBL West Division running away.  Second place Niagara finished six games behind the Yanks. Brust gave much of the credit for his team’s late success to assistant coaches Olivier Bertrand, Bob Shaffer and Ryan Sullivan.

“If I have done one thing right, it’s that I got the right guys for my staff,” Brust commented. This award is because of them. They were a part of every decision made.”

“Mark has had complete faith in me. He turned over the car and gave me the keys. He stayed out of my hair and let me make my own decisions.”

Brust’s four-year tenure with Webster has been, if nothing else, an exercise in perseverance. He took over the club in 2008 and quickly the Yanks grabbed an early division lead. But three weeks into the season Webster lost its best arm out of the bullpen when Pat Urckfitz signed a free agent deal with the Houston Astros. One week after that the team’s best hitter, T.J. Baumet, left for personal reasons. Finally, all-league selection and current minor leaguer, Cory Brownsten took advantage of an opportunity to play more games for the season by moving to the Coastal Plains League. The Yanks lost 10 one-run games on the way to a 17-21 ledger.

Webster climbed to .500 a year later finishing 21-21 but missed out on the playoffs when the club dropped a rare triple-header on the final day of regular season play. Rain outs and scheduling conflicts caused the Yanks to finish one game and play two others against two different teams on the final day.

Last year the pinstripes earned a berth in the playoffs but fell in the third and deciding game of the first round to Allegany County.

Brust has been one to measure his work by the individual growth of each player. Rather than looking at what a player can do for the team, the coach envisions what a player can become.  Although the time spent with a team is a brief seven to eight weeks, he and his staff made a point to help each student-athlete improve.

“The schools trusted us with their players,” Brust mentioned. “It was fun to see each of them get better. We need to help kids get better for the next level.”

The efforts show, for example, when a pitcher develops a change-up to compliment his fast ball, or a batter who starts using the whole field for hits.

Brust noted his own growth over the past four campaigns.

“I have spent more time listening to my instincts. They are 19-20 year old kids. They have a lot going on in their lives.”

Brust’s instincts and perseverance come from a lifetime of experiences around the game.

He earned All-Greater Rochester honors at Cardinal Mooney High School and accepted a full scholarship to the University of Maryland. Once there, he quickly took over as the starting shortstop for the Terrapins. As soon as he took the position, he lost it. After ten games anchoring an infield in the Atlantic Coast Conference, Brust was sent to the bench. He later reclaimed the spot only to lose it again.

“I should have red-shirted like any other freshman,” Brust recalled. “I wasn’t ready for that.”

He returned home beaten but not broken. Brust transferred to Monroe Community College where earned third-team All American honors and then moved on to Ball State University. He was elected both team captain and Most Valuable Player twice while garnering more All-American accolades.

From school Brust signed with the Atlanta Braves in 1989 and played three seasons in the minor leagues. He was coached by former major league skipper Grady Little and earned one major league spring training start. He homered in that one game. Former Brave, David Justice waited at home plate to congratulate him.  Timing was not his ally. The Braves’ minor league system was stocked with prospects that would lead the club to 14 first-place finishes in 15 years.

Brust found himself on the outside looking in. He left professional baseball but took with him the lessons he has shared in his years of coaching. Besides leading Webster, he has served as an assistant in the MCC program for seven years.  The Tribunes have 22 Region III crowns in 47 years of existence. Seven of those titles have come during Brust’s time spent on the MCC bench.

Brust announced that 2011 will be his last year coaching Webster. For now, he will focus on the MCC program.

5 Responses to "Brust named NYCBL Coach of the Year"