Courtesy of RichmondSpiders.com. UNIVERSITY OF RICHMOND, Va. – Five Spiders finished in double figures and senior Darrius Garrett tied a single-season program record with 77 blocks as Richmond rolled to a 102-58 rout of Fordham behind a season-high and Robins Center record 16 three-pointers on Wednesday. Richmond became the first Division I school to have […]

A late 16-6 run in the second half propelled the UMass men’s basketball team to a 79-68 win at Richmond on Saturday afternoon at the Robins Center. Jesse Morgan led the way with 20 points including a key three-pointer to spark the run after the Spiders had pulled within four points with 6:53 left in the game…

Four Spiders finished in double figures and Richmond turned in a complete game on both ends of the floor on Saturday as it rolled to a 76-65 victory over conference rival Temple at the Robins Center.

NEWPORT NEWS, Va. – Temple’s Kristen McCarthy and George Washington’s Tara Booker have been named the Atlantic 10 Conference Women’s Basketball Co-Players of the Week, the league office announced on Monday. The recipients were recognized for their performances for games played during the week of Jan. 2-8. McCarthy was also named the Big 5 Women’s […]

Gaels Bounce Back With 88-79 Win At Richmond 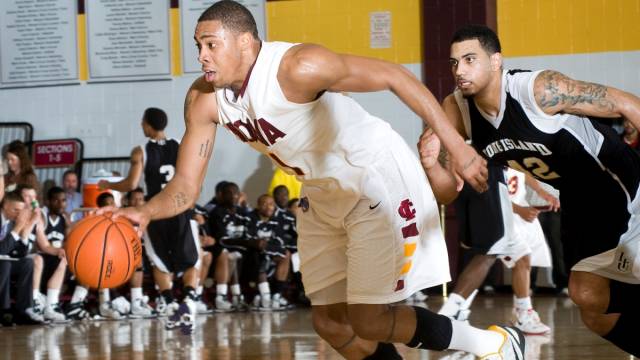 The Iona College men’s basketball team’s strong second half led to an 88-79 win over Richmond at the Robins Center. The Gaels (8-2) bounced back from their largest defeat in two seasons and improved to 4-1 on its current nine-game stretch away from New Rochelle…

Richmond hosts UNC Greensboro Saturday at 12 p.m. at the Robins Center Saturday. The Latest: • Richmond went on a 10-0 run to get within 55-50 with seven minutes left, but Virginia prevailed, 69-56, Sunday afternoon at the Robins Center. •  Senior guard Abby Oliver poured in a game-high 23 points and dished a career-high […]

Richmond opens its home slate against its oldest rival, William & Mary Monday at 7 p.m. at the Robins Center.

Justin Harper had a game-high 24 points, and Dan Geriot added 17 to go with eight rebounds as the Richmond Spiders celebrated senior day with an 82-65 victory over the St. Bonaventure Bonnies in Atlantic 10 action at the Robins Center.