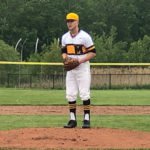 By BILLY HEYEN McQuaid ace Hunter Walsh looked down at his right hand on May 28 and repeated, “It’s hot.” He was in the midst of a sectional quarterfinal gem, a “lights out” 14-strikeout performance. While that moment may have been limited to a singular game, it could’ve happened in any of Walsh’s outings before or after then. He’s been utterly dominant all season, he’s … END_OF_DOCUMENT_TOKEN_TO_BE_REPLACED