Dayton-Xavier: Tale Of The Tape

By Paul Gotham Setting: The Blackburn / McCafferty Trophy is on the line at the Cintas Center Saturday morning when Brian Gregory’s Dayton Flyers (13-3 / 2-0) travel south on I75 for an Atlantic 10 clash with Chris Mack’s Xavier Musketeers (11-5 / 3-0). The Trophy honors former Dayton coach Tom Blackburn (1947-64) and Xavier […]

Syracuse-West Virginia: Tale Of The Tape 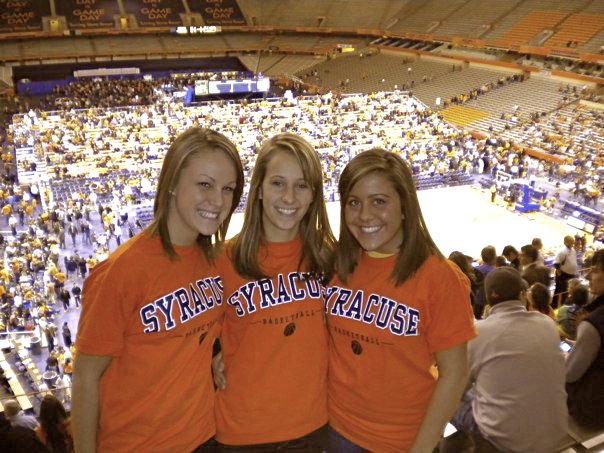 The game is the second of three in a on the road for the Orange. Wednesday, Syracuse downed Rutgers, 81-65. The Orange travel to South bend for a tilt with Notre Dame on Monday. After two on the road, West Virginia returns home. After Saturday, the Mountaineers take a break from conference play for games with Marshall and Ohio State.

Tennessee dictated WHERE Kansas would take their shots. The undermanned Vols put on a defensive transition clinic – ball, block, and first pass. The Vols took care of their match up responsibilities all night. Tennessee played zone and made the Jayhwaks shoot over them. The Kansas starting front court of Cole Aldrich and Marcus Morris attempted a combined 10 shots all night. That was shot attempts. Kansas took 61 shots. Tennessee dictated where they would take those shots.

Kentucky-Florida: Tale Of The Tape

After beginning the season with eight victories, the Gators have limped through a 3-4 stretch with losses to Richmond, South Alabama and most recently at Vanderbilt, 95-87. Six of Kentucky’s victories have been by single digits.

Duke-Georgia Tech: Tale Of The Tape

Georgia Tech will play with a sense of urgency. The ‘Ramblin Wreck’ wants to avoid back-to-back defeats and falling behind in the ACC race. Duke will need to fight off any lethargy created by their recent travel schedule.

It was Kansas’s other 63 points that were the difference. Temple’s many ill-advised shots resulted in a highlight reel of lay ups at the other end. Kansas frustrated Temple’s offense all day. The Owls could not consistently pass on the interior and settled for long shots. The Jayhawks converted those opportunities at the other end.

Memphis-Syracuse: Tale Of The Tape

Syracuse is second in the nation with 12.6 steals per game. Memphis ranks ninth in the category with 10.6 steals per game. The similarities continue from there. The Orange outscore opponents by an average margin of 22 points. The Tigers hold a 20.1 advantage in this category. Syracuse hits .393 of their attempts from behind the arc. Memphis finishes .358 from long range. Syracuse limits their opponents to .298 success on three balls. Memphis opponents hit just .292 behind the arc.

Xavier-Wake Forest: Tale Of The Tape

Xavier leads the all-time series 1-0. The Muskies downed the Deacs in the second round of the 1999 NIT Tournament, 87-76. Xavier has made eight appearances in the NCAA Tournament over the last nine seasons including two Elite Eight finishes (’04 and ’08) and a spot in Sweet Sixteen last season. Wake Forest has made 21 appearances in the tournament with one Final Four showing, seven occasions in the Elite Eight, and Sweet Sixteen showings.

Kansas-Temple: Tale Of The Tape

Temple finished an undefeated month of December with a victory over Northern Illinois, 70-60. Kansas throttled Belmont, 81-51 to close out 2009. Temple opens A10 play on Wednesday. Kansas does not start conference play until January 13th.