La Salle became the first team to defeat Massachusetts at home this season, and won for the seventh time in its last eight tries against the Minutemen, in an entertaining 72-71 victory at the Mullins Center on Saturday night. Sophomore Tyreek Duren scored all of his 15 points in the second half, including a fade-jumper with 50 seconds left that broke a 66-66 tie…

UMass runs past Bona in Massachusetts 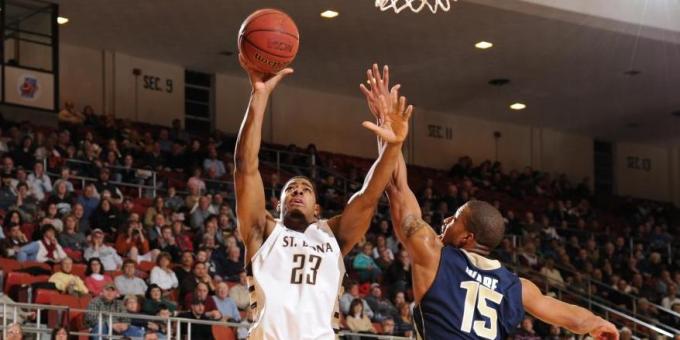 Andrew Nicholson led the Bonnies with 24 points and nine rebounds, but UMass, which started the second half on a 14-0 run, put together a 17-2 advantage over a five-minute span down the stretch to lock up what had been a three-point game with 8:41 left….

Courtesy of UMassAthletics.com. WASHINGTON, D.C. – Terrell Vinson scored a career-high 21 points and led a season-high shooting for UMass as the Minutemen basketball team defeated George Washington, 86-75, at the Charles E. Smith Center on Saturday night. With four Minutemen from the D.C. area, it was Vinson, the Baltimore native who had the biggest […]

Courtesy of GoRhody.com. WHAT IT MEANS Rhode Island takes down its second straight first-place A-10 opponent, this time over Massachusetts – 81-78 in overtime.  The win also snaps a three-game slide versus the Minutemen.  It marks the first time this season that the Rams have strung together back-to-back wins, as they move to 2-6 overall […]

B.J. Monteiro scored 23 points and Sean Johnson added 20 points and a career high 10 rebounds as Duquesne forced 29 turnovers in an 80-69 Atlantic 10 win over Massachusetts at the Palumbo Center.

Charlotte rallied from a 20-point, second half deficit to take a one-point lead before falling at UMass, 85-75, in A-10 action Wednesday night…

KINGSTON, R.I. – Behind a season-high 20 points from senior Megan Zullo (Greenville, N.C./Farmville/N.C. State), the UMass women’s basketball team used a gritty defensive effort in a come-from-behind win over Rhode Island, 46-39, at the Ryan Center on Wednesday evening. With the victory, which marked the first time the Minutewomen held an opponent under 40 […]

The Minutemen had a balanced scoring offense with five players in double figures with Chaz Williams leading the team with 20 points. The win improves UMass to 12-3 overall and 1-0 in the A-10…