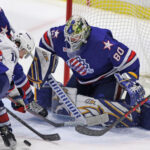 By KEVIN OKLOBZIJA Six days earlier, the Rochester Americans were basking in the spoils of accomplishment, having just eliminated the Utica Comets from the Calder Cup playoffs. There was jubilation. There was satisfaction. There were dowsings with beer. And now, here they were on Wednesday night, trying to process how a triple-overtime thriller ended their … END_OF_DOCUMENT_TOKEN_TO_BE_REPLACED 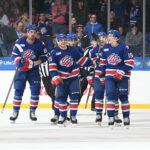 By KEVIN OKLOBZIJA My, how the fortunes and feelings can change in the blink of an eye. As last week was ending, the Rochester Americans were riding high atop a wave of euphoria. They had upended the regular-season North Division champion Utica Comets on the road in a winner-take-all fifth game last Thursday. And now, four days later, the Amerks are the ones facing … END_OF_DOCUMENT_TOKEN_TO_BE_REPLACED 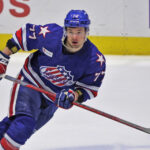 By KEVIN OKLOBZIJA The opening game of the Calder Cup North Division finals became the Danick Martel show – in large part because the Rochester Americans were no-shows. Martel, a seventh-year veteran winger, scored four goals in a span of 28:23 as the Laval Rocket routed the Amerks 6-1 on Sunday night in Laval, Quebec. Amerks goalie Aaron Dell allowed three of those … END_OF_DOCUMENT_TOKEN_TO_BE_REPLACED 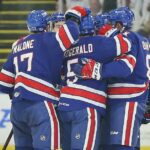 By KEVIN OKLOBZIJA UTICA – With their season on the brink of ending on Thursday night, the Rochester Americans not only stared down elimination and didn’t blink, they ran it full force into the end boards, refusing to lose on the road to the regular season division champions. Trailing by a goal heading into the third period, the Amerks scored twice early in a span of 3 … END_OF_DOCUMENT_TOKEN_TO_BE_REPLACED 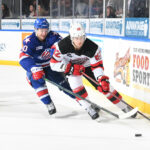 By KEVIN OKLOBZIJA The regular season provides an opportunity for hockey players to show what they’re capable of doing on the ice, where their skillset is evaluated and on display. The postseason is where they show what they’re made of. It’s a series of tests where drive and determination are measured on a par with goals, assists and saves. The Rochester Americans … END_OF_DOCUMENT_TOKEN_TO_BE_REPLACED