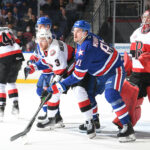 By KEVIN OKLOBZIJA Brett Murray picked the perfect time to finally end his personal drought-of-all-droughts and the franchise drought-of-all-droughts. Murray’s goal 17:39 into overtime on Friday night gave the Rochester Americans another 4-3 OT victory over the Belleville Senators, completing the 2-0 sweep of the Calder Cup North Division mini-round play-in series. The … END_OF_DOCUMENT_TOKEN_TO_BE_REPLACED 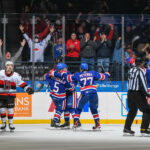 By KEVIN OKLOBZIJA Maybe, just maybe, this current iteration of the Rochester Americans is ready to put more than a decade and a half of playoff dread behind and bring the glory days of springtime hockey back to life. They sure made that statement on Wednesday night, rallying from a 3-0 third-period deficit for an improbable 4-3 overtime victory over the Belleville … END_OF_DOCUMENT_TOKEN_TO_BE_REPLACED 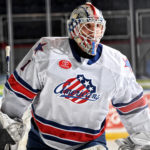 By KEVIN OKLOBZIJA (updated with playoff opponent) The Rochester Americans earned the final playoff berth in the American Hockey League on Saturday without even playing. Not all news was good, however. The Amerks will be without goalie Ukko-Pekka Luukkonen when they face the Belleville Senators in the best-of-three play-in series starting Wednesday in downtown … END_OF_DOCUMENT_TOKEN_TO_BE_REPLACED 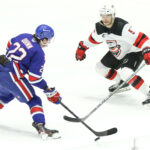 By KEVIN OKLOBZIJA In a stare-down with elimination from playoff contention on Friday night, the Rochester Americans refused to blink and instead routed the Utica Comets 8-1 in their regular season finale. JJ Peterka scored his second hat trick of the month and AHL Rookie of the Year Jack Quinn scored one goal and set up another as the Amerks sprinted to a 4-0 … END_OF_DOCUMENT_TOKEN_TO_BE_REPLACED 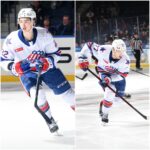 By KEVIN OKLOBZIJA For the first time in 22 years, two members of the Rochester Americans were named to the American Hockey League’s All-Rookie Team. Speedy, high-scoring wingers JJ Peterka and Jack Quinn were among the three forwards named to the six-player team. It’s the first time two Amerks forwards have been selected to the same All-Rookie Team, which the AHL … END_OF_DOCUMENT_TOKEN_TO_BE_REPLACED