Courtesy: Brockport, U of R and St. John Fisher Athletics Both the University of Rochester and Brockport baseball teams earned at-large bids into the NCAA Division III Regionals and both will host four-team double-elimination pods. Empire 8 Champion St. John Fisher will travel to SUNYAC Champion Cortland. The nationally-ranked No. 22 Brockport baseball team earned an at-large … END_OF_DOCUMENT_TOKEN_TO_BE_REPLACED

Courtesy: FLCC Athletics The Finger Lakes Community College baseball team completed a second-straight trip to the National Junior College Athletic Association (NJCAA) Region III Final Four May 19th. The Lakers completed a comeback after finding themselves with their back against the wall. Early in the season, the Spartans swept the Lakers at Falcon Park, and it looked as … END_OF_DOCUMENT_TOKEN_TO_BE_REPLACED

Courtesy: St John Fisher Athletics For the second year in a row – and the fourth time in program history – the St. John Fisher College baseball team has been crowned Empire 8 Conference champions. The Cardinals, the top seed in the E8 tournament, swept the best-of-three series from second-seeded Utica University on Friday by scores of 14-3 and 9-2.With the trophy in hand, the … END_OF_DOCUMENT_TOKEN_TO_BE_REPLACED 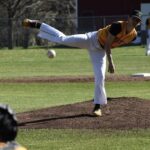 PRATTSBURGH — Haden Abbott threw a complete game 2-hit shutout to lead Avoca/Prattsburgh past Canisteo-Greenwood/Jasper-Troupsburg, 2-0 on Saturday. Abbott had six strikeouts and walked two, then helped his cause with two hits and scored a run as A-P improved to 12-5. "Haden threw a gem, he's developed a killer curve and nasty slider to go with his fastball and he gets a lot … END_OF_DOCUMENT_TOKEN_TO_BE_REPLACED

Courtesy: RIT Athletics The RIT baseball team opened Liberty League postseason play with a sweep at Bard, taking the first game, 5-3, before advancing to the Liberty League Tournament with a 6-2 victory in the second game, Saturday.In game one, RIT scored four runs in the third inning and then added one run in the fourth. Bard's rally fell short with three runs in the … END_OF_DOCUMENT_TOKEN_TO_BE_REPLACED