BISHOP KEARNEY (8-2) 81
MARCELLUS (III) 32
Asia Wilson exploded for a career-high 30 points as Bishop Kearney dominated both ends of the floor en route to winning the Bishop Grimes Martin Luther King Tournament. The sophomore guard output 11 points in both the first and fourth quarters, two in the second and six in the third. Amaia Jackson recorded a triple-double of 20 points, 11 assists and 11 steals to garner tournament MVP honors. The sophomore guard poured in nine field goals, including seven from inside the arc. Klarissa Goode and Allie Hall both contributed 12 points. Hall accumulated 14 rebounds for a double-double along with five blocks. Goode compiled seven steals and six assists. Senior forward Caydence Hadley posted seven points, 12 boards and seven rejections.

Quote from Hornell head coach Brian Dyring: “Our kids as always played as hard as they could, but ran out of gas late in the game against a very skilled and athletic opponent in Aquinas. I thought we rebounded the ball very well, but did a really bad job in locating and recognizing who the shooters are and where they were located. We need to do a better job with our court awareness and the other team’s player personnel that’s on the floor. We have to do a better job communicating as well. Several times when we weren’t in the press, we would find a player that thought we were in the press and when we were pressing at times, we would have a player that wasn’t pressing. All fixable things, but they need to be cleaned up sooner than later as we have two big league games left this week at Wayland-Cohocton and Dansville. If we can clean those things up, it will go a long way in helping us be more successful against the elite teams.” 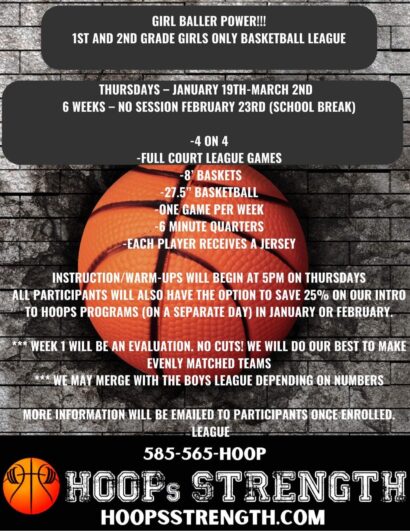 WHEATLAND-CHILI (4-8) 31
RED CREEK (1-9) 21
For Red Creek, eighth-grade guard Taylor Bailey led with 10 points, two rebounds and a pair of steals. Freshman forward McKenzie Allen corralled 10 rebounds to go along with two points, one block and a swipe. Ryleigh Holliday (4), Madalyn Mayville (3) and Halle Brown (2) rounded out the scoring for the Rams.

Quote from Haverling head coach Randy Abrams: “Tonight was just not our night. I’m sure our shooting percentage was in the low 20s and Addison made big shots when needed. Carlineo went 6-of-7 from the foul line at the end of fourth quarter when we were forced to start fouling. We’re still searching for a consistent third and fourth scorer on the offensive end. The road gets tough going to Livonia later this week. We get back to work tomorrow and keep trying to improve.”