The four seniors were named the Players of the Year for their respective divisions as announced by Monroe County coaches.

Giunta nabbed Division I player of the year honors. The senior midfielder netted seven goals and assisted five more goals tallying 19 points on the year. The midfielder’s 19 points finished tied for second on Penfield. Giunta led the Patriots to a Class AA sectional title; Penfield and Fairport were named Co-Champions but the Patriots advanced on penalty kicks.

Teammates Courtney Felton, Kacie Salva and Delaney Tellex joined Giunta on the Monroe County Division I First Team. Tellex led the team in points and goals. The midfielder scored 10 goals. Felton finished third on the team in goals with six, and the senior also added three assists. Salva anchored a backline that limited opponents to a total of nine goals.

Webster Schroeder had three players featured on First Team All-County. Kendall Brown, Meg Fry, and Maddie Peterson all earned the honor. Peterson, Brown, and Fry all contributed to a Warriors defense that only allowed 10 goals all season. Fry recorded 103 saves and only allowed six goals in 1110 minutes in goal, and Brown had three assists.

Brigid Mulholland and Katie Diem joined the First Team from Class AA Co-Champion Fairport. Diem had the second-most points (18) for the Red Raiders. The midfielder scored seven goals and assisted four. Mulholland tallied 162 saves in goal while playing 1180 minutes in the net. The goalkeeper added a goal to her junior season.

Hilton and Rush-Henrietta both had two players named to the First Team in Monroe County Division I. Rylie Delvecchio and Brynn Sidebotham from the Cadets, and Alivia Day and Avery Roberts for the Royal Comets. Sidebotham led Hilton in points with 18. The midfielder/forward had five goals and eight assists. Delvecchio spearheaded the Cadet defense. Day and Roberts paced the Rush-Henrietta offense with 35 and 33 points respectively. Day netted 16 goals and assisted three, and Roberts found the goal 13 times while assisting seven.

Abby Herbst and Stefanie Sellitto earned Second Team honors for Schroeder. Isabella Pucci and Morgan Donovan made the Second Team for Fairport. Herbst had four goals and three assists. Sellitto scored a team-high five goals to go along with one assist. Pucci led the Red Raiders with a team-high 10 goals and 24 points. Donovan helped lock down things on the defensive end.
Maggie Galewski, Reilly Jones, Caitlin Nelson, Karlee Hargather, Cassidy Pearce, and Eva DiDomenico capped-off the Second Team. Galewski and Jones from Victor, Nelson and Hargether from Hilton, and Pearce and DiDomeico from Rush-Henrietta. 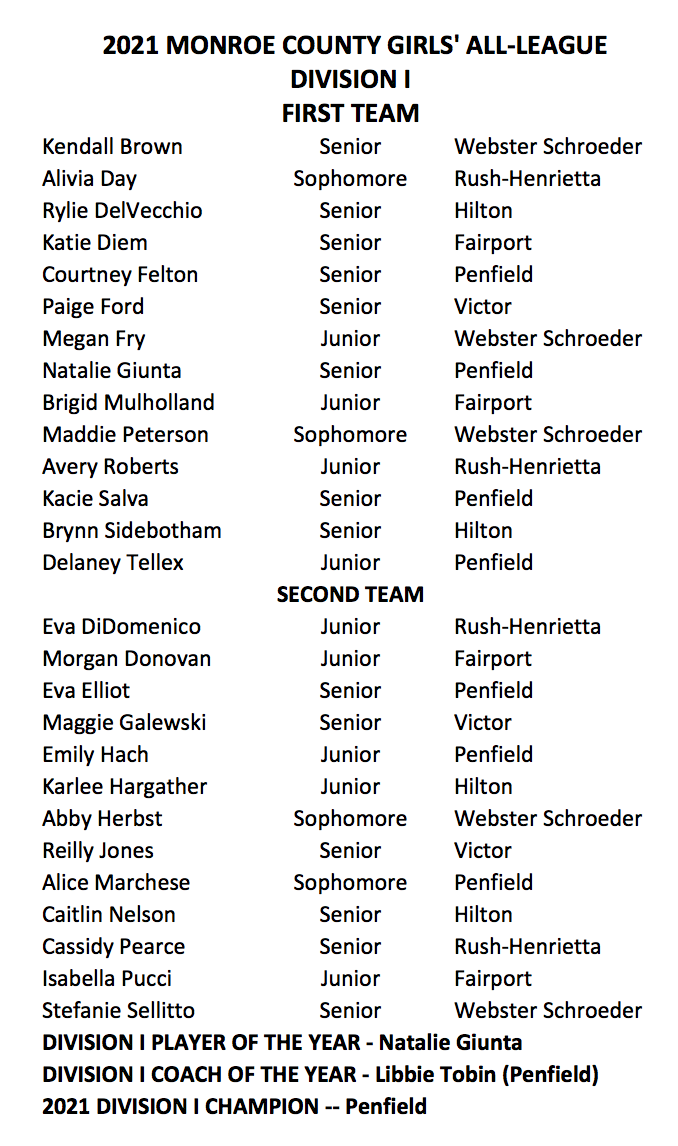 DeHond received the honor of Division II Player of the Year. The forward tallied 68 points via 27 goals scored and 14 assists. DeHond had two separate games with a hat trick this year. The first in a 6-0 win against Irondequoit, and the second in a 5-0 win against Gates-Chili. The senior paced Spencerport to a 19-0-1 record and a Class A1 sectional championship.

Teammates Cate Burns, Alyssa Hackett, Lily Brongo, and Emma Taylor joined DeHond on the Monroe County Division II First Team. Brongo finished second on the team in points with 47; the midfielder led the team in assists with 27 and chipped in with 10 goals scored. Hackett added a total of 38 points of her own, with a second-best 15 goals scored alongside eight assists. Taylor and Burns headlined a stout Ranger defense that allowed just six goals all year. Burns had 110 saves in 1497 minutes in goal. The keeper recorded a save percentage of 95.6 percent.

Churchville-Chili and Webster Thomas both sent two players to the First Team respectively. Catherine Rogers and Isabella Lavrynenko made it for Thomas. Amelia Breton and Sarah Zigrossi made it for the Saints. Rogers led the Titans in points, goals scored, and assists. The midfielder had 12 goals and six assists which resulted in 30 points. Lavrynenko collected two assists while locking down the Titan defense. Breton led the charge for the Saints with a team-high eight goals and 19 points. Zigrossi chipped in three assists and one goal.

Brighton featured a league-high four players to make the Monroe County Division II Second Team. Madeline Weld, Anna Leone, Finn Cregan, and Meredith Reynolds all captured the honor. Cregan had a share for the most assists on the team with eight while adding one goal, Reynolds netted three goals and assisted seven, and Weld and Leone held things down defensively for Brighton.

Alyssa Vukosic, Mia Bodulovic, and Samantha Cipolla all made Second Team for Gates-Chili. Cipolla led the team with 17 points via eight goals scored and one assist. Budulovic finished second in points with 14 via five goals and four assists. Vukosic added a goal alongside stellar defensive play.

Aleena Solano and Cami Brescia earned Second Team honors for Class A1 champion Spencerport. Solano found the goal 14 times to go along with 12 assists, and Brescia worked in the midfield. Irondequoit had two featured players on the Second Team. Jenna Hewitt and Maeve Steckley earned the honors for the Eagles. Hewitt and Steckley both contributed a total of nine points. Hewitt scored three goals and assisted three, and Steckley had two goals while assisting five.

Ella Wambach and Sofia Bement finished off the Second Team for Webster Thomas. The two worked in the middle of the field and excelled on the defensive end for the Titans. 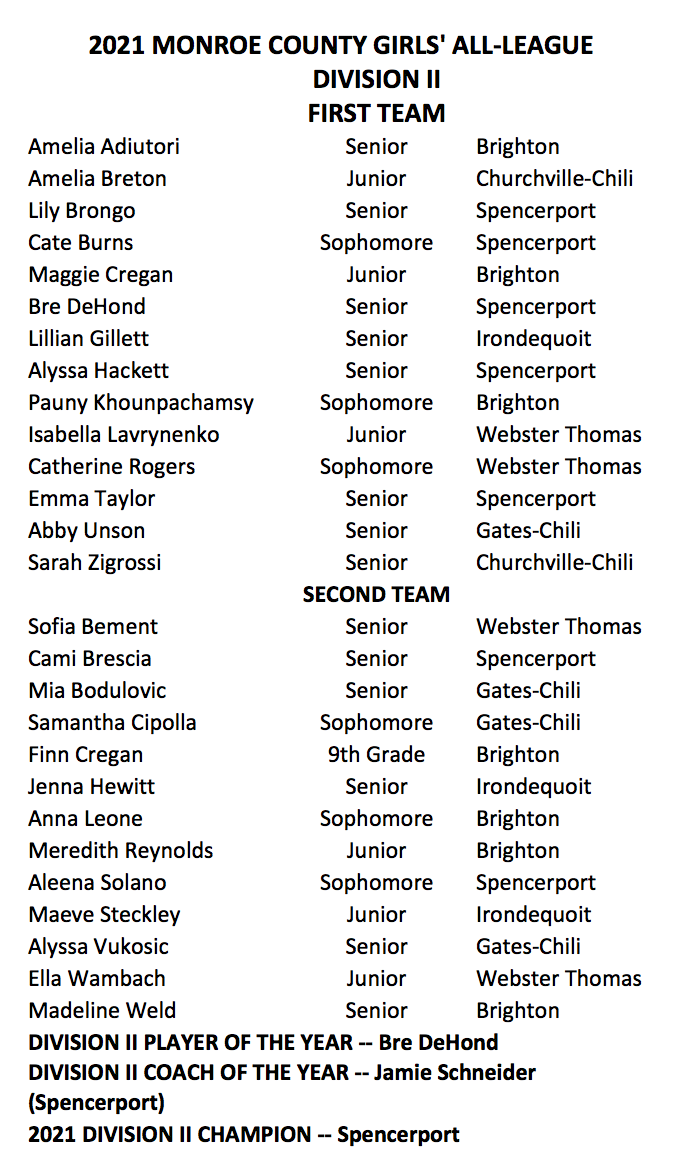 Fadale earned Division III Player of the Year honors. The midfielder/forward shared the lead for goals with 13 for Brockport. Fadale added four assists to her season. The senior’s best game came against Gates-Chili in a 2-1 win. Fadale scored both goals for the Blue Devils including the game-winner in the final minute of regulation.

Teammates Nadia Nealon and Maija Young joined Fadale on the Monroe County Division III First Team. Nealon led the team in points with 32. The midfielder/forward recorded 13 goals to go along with six assists. Young had a team-high 10 assists to pair up with seven goals.

Pittsford Mendon sent a league-high four players to the First Team. Leah Shaffer, Elena Barr, Bridget Merkel, and Rachel Lee represented the Vikings. Merkel led the team with 11 goals scored and six assists, and Lee ended second in goals with 10 alongside six assists. Barr added seven goals and two assists from the midfield. Shaffer held down the Mendon defense from goal; the keeper recorded 68 saves and only allowed six goals in 1144 minutes.

Wrianna Hudson, Larissa Johnston, Hailey Romansky, and Ava Taylor represented Greece on the First Team. Hudson and Johnson made it for Athena, and Johnson and Romansky made it for Arcadia. Hudson paced the Trojans with a team-high 26 goals scored and 12 assists. Johnston held down the Athena defense while scoring two goals and picking up three assists. Romansky saved 155 shots in 1210 minutes in goal for the Titans. Taylor netted two goals while anchoring the Arcadia defense.

Ava Allen and Ava O’Neil earned First Team honors for Pittsford Sutherland. Allen finished second on the team in points with 14 via five goals and four assists. O’Neil ended her season with four goals and three assists from the midfield/forward position. Ellie Teerlinck rounded out the First Team from Canandaigua. The midfielder led the Braves in points and goals. Teerlinck finished her season with seven goals and three assists.

Brockport and Pittsford Mendon shared a league-high three players to be named on the Monroe County Division III Second Team.

Alexa Tenney and Payton Malec made it for Canandaigua. Tenney led the Braves in assists with six, the defender/forward added three goals. Malec recorded a save percentage of 84.6. The goalkeeper recorded 148 saves in 1125 minutes in goal. Laura Bennett and Allie Finkbeiner also made the Second Team from Sutherland. Bennett had a team-high 20 points via a team-high six goals and eight assists. Finkbeiner contributed on the defensive end while scoring three goals and two assists.

Arcadia and Athena once again had two players make the Second Team. Ava Perkins and Emily Moulthrop for Arcadia, and Emilee Montagliano and Aleksa Lelis for Athena. Perkins helped the Titan defense, and Moulthrop found the goal twice and picked up two assists. Montagliano had 185 saves in goal for the Trojans, including a 91.6 save percentage. Lelis helped the Trojan defense while chipping in three assists over the year. 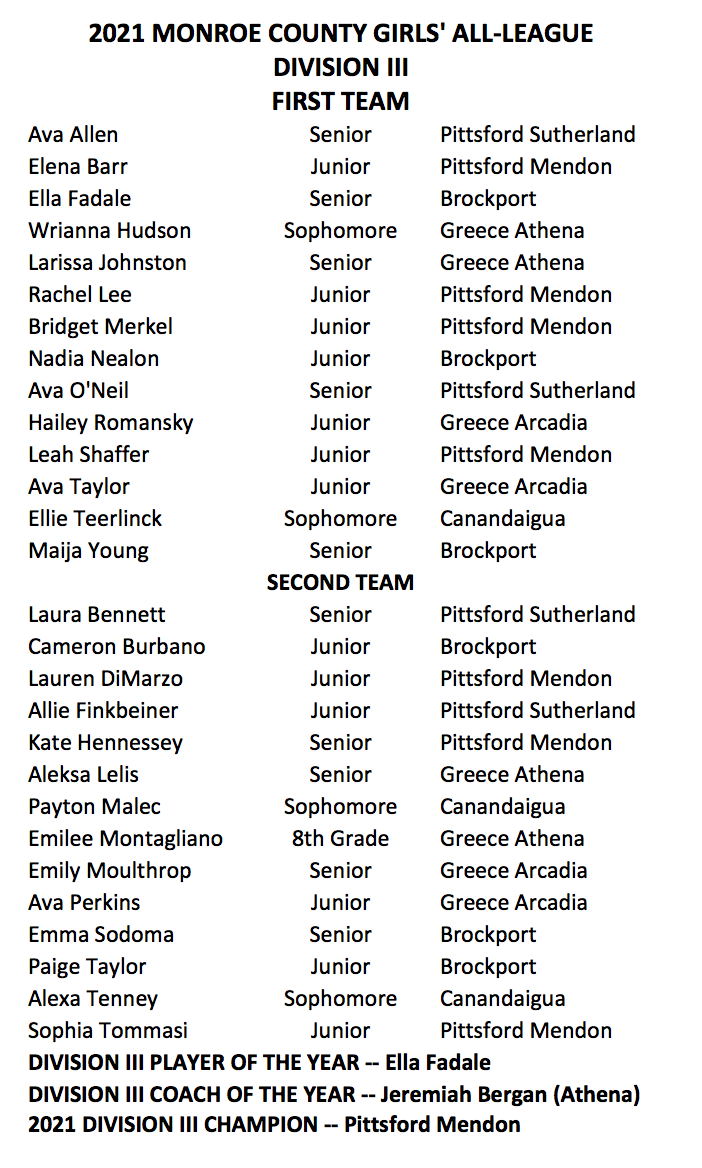 DeRosa earned the Monroe County Division IV Player of the Year honor for Greece Olympia. DeRosa had a team-high in points and assists. The forward netted 31 goals and assists eight resulting in a total of 70 points. DeRosa’s best game came against Geneva in a 5-2 win. The senior had all five goals for the Spartans. DeRosa helped Greece Olympia reach the Class B1 semifinals.

Teammates Morgan Welch, Madison Walker, and Laynee Hysner joined DeRosa on the Monroe County Division IV First Team. Welch finished second on the team in points with 23 behind seven goals scored and nine assists. Walker and Hysner helped lock things down on the defensive end for the Spartans. Walker added a goal and three assists; while Hysner chipped in three goals and one assist.

Honeoye Falls-Lima and Batavia each had three players on the First Team.

Anna Varland, Maddie Barone, and Ovivia Halpin made the First Team for Batavia. Varland paced the Blue Devil offense with a team-high 45 points. The midfielder found the goal 19 times and assisted seven more goals. Halpin led Batavia in assists with 10, and scored five goals of her own. Barone recorded 99 saves in goal for Batavia while logging 1350 minutes in goal. The keeper had a save percentage of 82.5.

Nevaeh Bunch and Sierra Manning  made First Team for Eastridge, and Ekemini Udofa rounded out the First Team for Greece Odyssey. Manning led the Lancers with a team-high 15 goals and 10 assists which equaled 40 points on the season. Bunch finished second in goals, assists, and points for Eastridge. Bunch netted 14 goals and assisted nine. Udofa paced the Leopards with a team-high 44 points. The forward scored 21 times and grabbed two assists.

Na’Dia Carter and Isabella Barbosa joined the Second Team from Eastridge. Carter and Barbosa spearheaded a Lancer defense that allowed 33 goals on the year. Barbosa added one goal and two assists to her seasons stat line.
Batavia, Honeoye Falls-Lima, and Greece Olympia all had three players on the Second Team which finished the squad.

Morgan Murray, Alyssa Turner, and Lily Miller all made it for the Blue Devils. Miller nabbed five goals and assisted three more alongside stellar defensive play. Turner and Murray both worked in the midfield, and Murray finished with three assists and one goal scored.

Kyleigh Dudley, Abby Zollo, and Kailey Annesi all earned Second Team honors for Honeoye Falls-Lima. Zollo finished tied for second in goals with five, and also finished second in assists with three for the Cougars.

Hannah Roxstorm, Sarah Tawaf, and Jordan Walker rounded out the Second Team for the Spartans. Roxstorm and Walker both tallied eight points on the season. Roxstorm had three goals and two assists, and Walker totaled two goals and four assists. Tawaf led Olympia in assists with 10, and chipped in the third-most goals with six.

Libbie Tobin (Penfield), Jamie Schneider (Spencerport), Jeremiah Bergan (Greece Athena), and Danielle Boneberg (Greece Olympia) earned Coach of the Year honors. Tobin led the Patriots to a 16-1-1 record, the Division I title, and the Class AA sectional title. Schneider coached the Rangers to an undefeated season, the Division II title, and a Class A1 sectional title. Bergan led the Trojans to a 13-5 record and the semifinals of Class A2. Boneberg paced the Spartans to the Division IV title and the sectional semifinals. 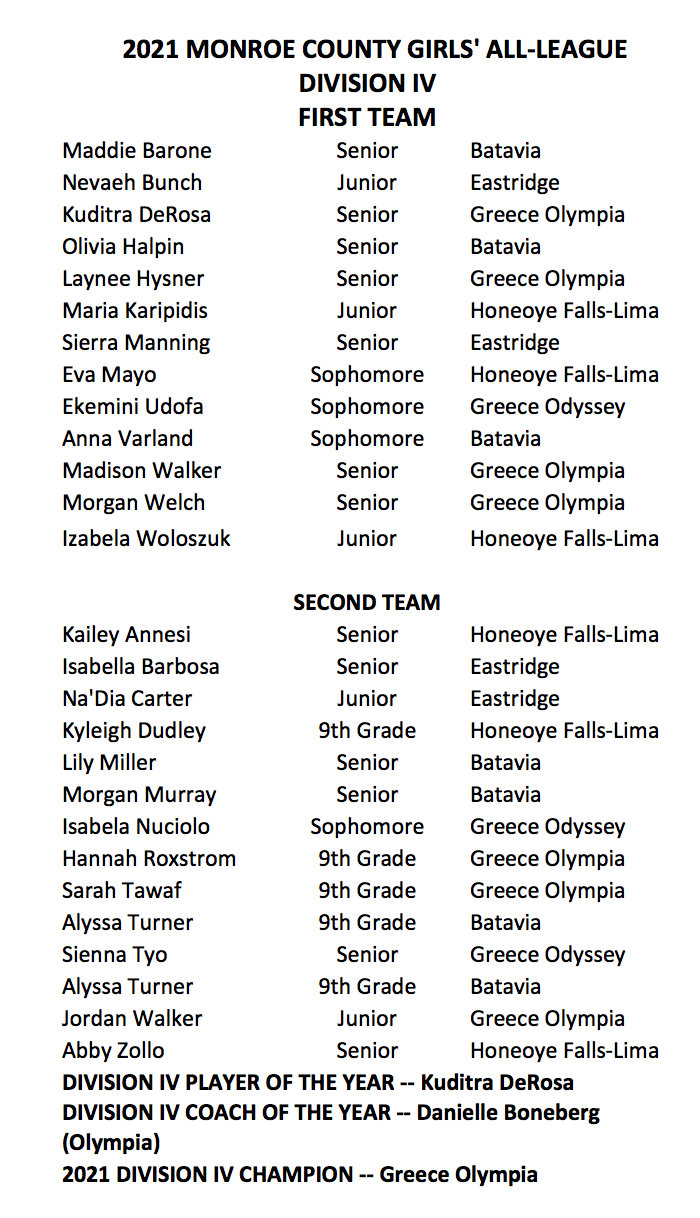