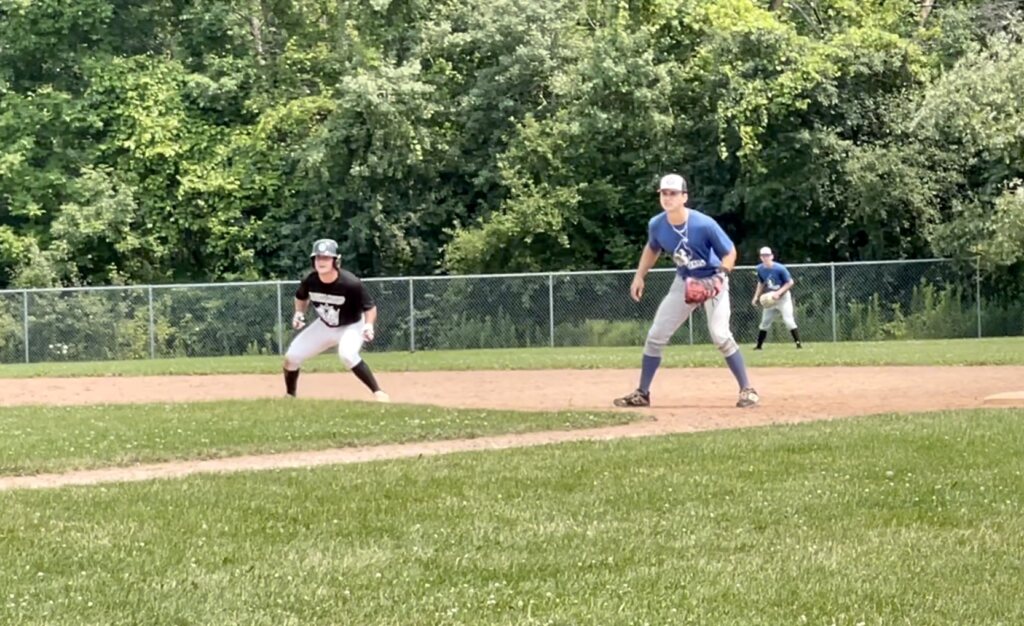 ORIOLES (13-4-1) 11
DUCKS (7-12) 7
The Orioles exploded for six hits and seven runs in the opening frame to keep the Ducks subdued for the majority of the game. Will Porter (RIT) led off the inning with a walk and later singled in Devin Cannon for the seventh run of the inning. Maxx Countryman (Finger Lakes CC), Keenan Calenzo, Nick Nealon Niagara County CC) and Cannon each registered a base hit while Tyler Cerame (Finger Lakes CC) and Dan Bowman reached via walks. Unfazed by the blowout inning, Zach Carpin (Clarkson College) blasted a solo shot on the first pitch in the bottom half of the first to immediately chip at the lead. DJ Stoianovich singled in Dylan Mackenzie (SUNY Cortland) to put the score at 7-2 by the end of the first.

Down 11-2 in the seventh, the Ducks pushed across five runs on five hits and two errors from the Oriole defense. Zackary Morrison (Finger Lakes CC) and Mackenzie doubled while Hayden Smith, Devin Hicks and Josh Van Bramer (Alfred State) each added a base hit in the frame. Offensively for the Orioles, Cannon accounted for the most offensive production with three RBI and a run scored on two hits. Calenzo finished with two hits, two runs scored and a RBI. Bowman crossed home three times and Cerame twice. Jared Drake was credited with the win after completing his day with five innings pitched, one earned run, four hits, five walks and a strikeout. He now sports a record of 4-0 with an ERA of 1.88. For the Ducks, Smith, Morrison and Stoianovich each finished with two hits and at least one RBI. Carpin and Mackenzie combined for four runs scored, two hits and two RBI.

CARDINALS (5-13) 6
MONARCHS (8-7-1) 10
Trailing 6-2 in the bottom of the sixth, the Monarchs took advantage of five free passes and four timely hits to generate eight runs for the unexpected victory. Jacob Parker, Josh Battaglia, Patrick Kravitz (St. John Fisher College) and Aidan Wallace accounted for three singles and a double, respectively. After giving up two runs the inning before, Jack Keagle (RIT) struck out the winning-run at the dish for the victory. The righty finished with six strikeouts, four walks and four hits allowed over four innings. The Monarch offense featured nine different players driving in a run and seven getting a hit. Jacob Carroll got the Monarchs on the board with a double and Walker Wright singled in a run, setting the score at 3-2 by the end of the first. Wallace, Battaglia and Parker led the offense with two hits apiece while combining for four RBI and three runs. For the Cardinals, three players accounted for a large chunk of offense in the loss. Frank McCabe and Dan Tirabassi (University of Rochester) generated the 3-0 lead in the first with a double and single, respectively. The two batters along with Jack Scanlon each finished with a pair of hits and accounted for four RBI. Dylan Boprey (Houghton College) finished with a single, two runs scored, three walks and a stolen base. Ryan Demitrovic (Alfred State) and Greyson McDonnell each had a hit as well.

MONARCHS (9-7-1) 7
BLUE JAYS (10-8) 0
Two pitchers combined to hold the Blue Jays to two hits as the Monarchs shutout the birds for the second time in as many games. Reliever Quin Ignazsak (Finger Lakes CC) recorded season highs in innings pitched (5), batters faced (16) and strikeouts (7) despite not earning the statistical win. The righty finished with seven strikeouts, one hit against and two walks allowed. Starter Joshua Ferris (Finger Lakes CC) manned the mound for the first two innings and allowed one hit while striking out one. Offensively, the squad touched home plate in every inning but the first and last. Jourdan Plaisted (Elmira College) led the charge with two hits, two RBI and two runs scored. The catcher doubled and smacked a round-tripper in the contest, both being his first of the season. Frank Fernandes, Walker Wright and Nate Sanderson (Hilbert College) all finished with two hits apiece. Sanderson added two RBI while the other two each added one. Jagger Nucci (St. Bonaventure) and Josh Battaglia had a hit for the Monarchs as well. Tyler Holmes (Hartford) and Trevor Zewan accounted for the Blue Jays’ only hits of the day.

ORIOLES (12-4-1) 4
CARDINALS (5-12) 1
In the completion of a suspended game from earlier in the week, Drew Delaney (Slippery Rock University) tossed a seven-inning, three-hit gem to lead the Orioles past the Cardinals. The right-hander gave up one run, no walks and set down seven on strikes while facing two batters over the minimum. Delaney has thrown complete games in back-to-back starts and has an ERA of 1.69 in five appearances. The Orioles snagged the lead in the fourth inning with three runs on five hits. Maxx Countryman (Finger Lakes CC) kicked off the inning with a double and was followed up by singles from Dan Bowman, Nick Nealon (Niagara County CC), Will Porter (RIT) and Tyler Cerame (Finger Lakes CC). Each side added a run in the final three innings of play to keep the gap at three runs. Bowman was the only batter to have a multi-hit day for either squad going 3-for-3 with a run and RBI. Jorge Oropeza (Finger Lakes CC), Gavin Moore, Grant Rodriguez and Henry Juan each collected a single. Cerame and Porter both picked up a RBI in the fourth and stole a base in the contest. For the Cards, Dan Tirabassi (University of Rochester) extended his hitting streak to seven games with a single in the seventh. Lucas Jackson and Ryan Demotrovic spoiled Delaney’s no-hit bid with back-to-back singles to open the fifth. Christian Blatter (Mercyhurst University) drove in the lone run on a swing that led to a fielder’s choice. Over six innings, James Fino allowed three runs on 11 hits in his first start of the season. He struck out six and walked none.