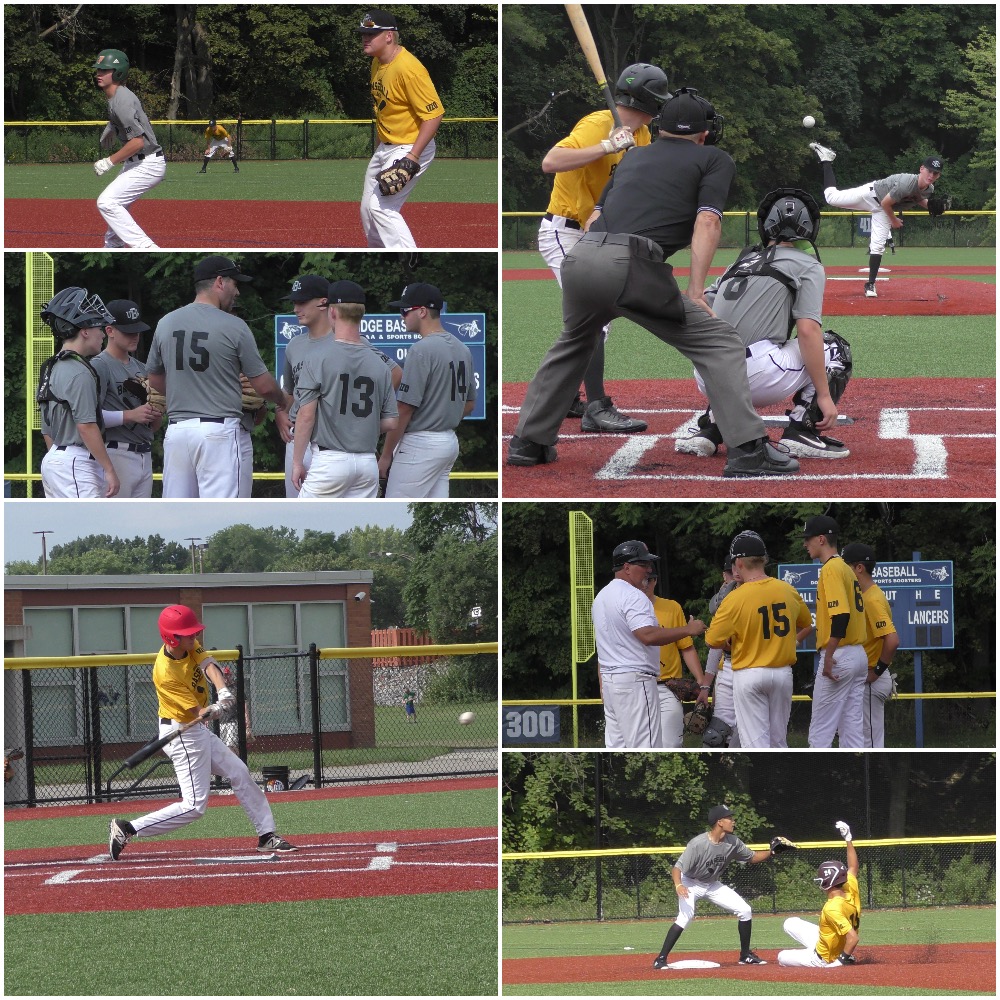 DI GREY 4
DI GOLD 5
Ethan Hurwitz (Pittsford Sutherland) collected a pair of RBI including the go-ahead run as DI Gold advanced in the Upstate Baseball League playoffs. Hurwitz drove in Korey Canton (Greece Odyssey) with the final run of a back-and-forth affair. Canton led the bottom of the sixth inning with a double and moved to third on a Joe Alphonse (Greece Olympia) ground ball. Hurwitz followed with an RBI groundout.

Korey Canton doubles to lead the bottom of the sixth and scores on an Ethan Hurwitz RBI groundout. Heading to the 7th: DI Gold 5 DI Grey 4 pic.twitter.com/JeHbWwS6Z5

Hurwitz finished 1-for-3 in the game including an RBI double in the first inning that scored Alphonse.

Joey Alphonse scores from first on an Ethan Hurwitz double. 1 out bottom of the first: DI Gold 1 DI Grey 1 pic.twitter.com/PDvWD24m7n

Ryan Merkov leaves runners on second and third with his third K of the inning, but DI Grey pushes across a run with a wild pitch. Mid 5: DI Grey 3 DI Gold 2 pic.twitter.com/8CPm0CdXXq

DI Grey out-hit DI Gold in the contest 7-5 and had leads of 1-0 and 3-2. James Stanek (Fairport) walked and scored on an error for a 1-0 edge in the first. Trailing 2-1 with two outs in the third,  Zach Allen (McQuaid Jesuit) singled and led three straight reaching base. Kenny Murphy (Webster Schroeder) eventually worked a bases-loaded walk to knot the game.

Grey took a 3-2 lead in the fifth. Jack Zawacki (Pittsford Sutherland) singled, moved to second when Aiden Coykendall (Churchville-Chili) beat out a bunt and eventually scored on a wild pitch.

Ed Hall (McQuaid Jesuit) plated Jett Kopalek (Rush-Henrietta) and Jacob Keller (Churchville-Chili) with a one-out double to give Gold a 4-3 lead in the fifth.

Grey answered in the top of the sixth. Murphy, who singled and reached base all three times he came to plate, walked to start the stanza. He swiped a pair of bags and scored on a wild pitch. Grey left the bases loaded.

Canton led all batters going 2-for-3 on the day.

The teams split two regular season meetings. Gold advances to meet DI Red on Monday with a spot in Tuesday’s championship game on the line. An 8 PM first pitch is scheduled at Basket Road Field.