DI BLUE 5
DI GOLD 3
Malakai Taylor (Mynderse) and Dylan Boprey (Hilton) collected an RBI apiece in a four-run seventh as DI Blue overcame a 3-1 for the come-from-behind victory. Taylor plated Grant Rodriguez (Rush-Henrietta) with a base hit and Boprey followed with a sacrifice fly.

Dylan Boprey’s sacrifice fly is part of 4-run 7th as DI Blue takes a 5-3 lead over DI Gold into the bottom of the 7th. pic.twitter.com/VsQ63kf0Ix

Taking advantage of two errors, DI Gold scored two to take the lead in the bottom of the fourth. Jett Kopalek (Rush-Henrietta) had the lone hit in the inning, driving in Joseph Alphonse (Olympia) with a single.

Jett Kopalek gets DI Gold on the board with a single through the left side. pic.twitter.com/syFQ7Gieq2

William Russotti pitched the first five innings for DI Gold and gave up one run on two hits. Russotti struck out six.

Will Russotti pulls the string for the final out of the top of the 4th. Right-hander fanned 2 in a clean frame. pic.twitter.com/srpu0O5VuO 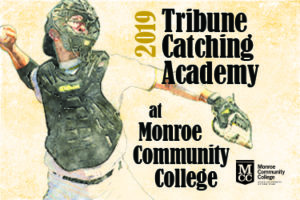 DI RED 7
DI GREEN 3
Four pitchers combined on a two-hitter and DI Red scored four in the second inning to take a lead it did not surrender. DJ Stoianovich plated Jack Scanlon (Aquinas) and Jack VonAhnen (Webster Schroeder) with a bases-loaded single.

DJ Stoianovich gets the scoring started for DI Red with a single through the right side. Devyn Cannon comes up throwing from right field. pic.twitter.com/0YSnYTVNLf

Ryan Coughlin (Greece Athena) and Stoianovich scored later in the inning on an error. Shane Harisis (Eastridge) started and struck out six over three innings of work. The right-hander retired eight of the last nine he faced.

Nolan Schoenberger worked an inning and two-thirds of relief, fanning two in a clean fourth. Stoianovich set down four of the five batters he faced in a scoreless inning and a third of work while Andrew Treviso (Fairport) needed 10 pitches to close out the win. The right-hander struck out the final batter of the game.

Dan Tirabassi takes away a hit from DJ Stoianovich pic.twitter.com/os5p9l5YqW

Max Stuver goes oppo for a 2-out RBI triple. pic.twitter.com/AwyYGoPs1i

Doubles out of the box, Jack Scanlon beats the tag at second to lead the bottom of the sixth. pic.twitter.com/e5njgTxPJS

Coughlin and Xavier Morales (Webster Schroeder) were the only other players to get a hit for Red. Tristan Murray collected an RBI with a sacrifice fly in the sixth.