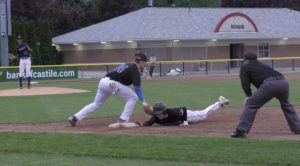 BATAVIA, N.Y. — After losing earlier in the year to Batavia in the Batavia Rotary Club Baseball Tournament, LeRoy had the opportunity in the regional qualifier to settle the score, and the Oatkan Knights did just that.

“These guys are playing with great determination right now and they know where they want to be,” LeRoy head coach Ieon Koukides said after the game. “Today we were able to get on top of them with a big inning and I tried a different approach with pitching today by pitching two guys that threw a little different than what they (Batavia) would normally see.”

The Knights jumped out to an early lead and never looked back as they defeated the Blue Devils 5-3 on Tuesday night in a packed Dwyer Stadium.

LeRoy threatened out of the gates with runners at the corners with two outs. Batavia’s starting pitcher Taiyo Iburi-Bethel, worked out of trouble to end the inning.

First hit of the game belongs to @LeRoy_Knights Reece Tresco with a double down the line. @PickinSplinters pic.twitter.com/wMRjzAi2jK

Batavia’s Taiyo Iburi-Bethel works out of a jam with runners on first and third and ends the top of the first inning with a strikeout. @PickinSplinters pic.twitter.com/KgfPoj4nwC

Batavia put pressure on the Knights’ starting pitcher, Kyler LaCarte in the second with runners on first and second with one out after a double and error. LaCarte set down the next two batters to end the inning.

In the top of the third inning, after a single, hit batter and walk loaded the bases for the Knights with one out, the Blue Devils made a pitching change to Alex Hale.

Iburi-Bethel finished his night throwing 2.1 innings and allowed three runs on three hits and had four strikeouts with a walk.

Hale walked the first batter he faced and Giovanni Caccamise scored to give the Knights a 1-0 lead. During the next at-bat, a passed ball scored Reece Tresco to extend the lead. The Knights were not done yet and another pitching change was made by Batavia and Andrew Francis came to the bump.

In the next at-bat, Austin Saeva drove in Tim McMullen and Kenny Saunders with a two-run single to give the Knights a 4-0 lead.

A two-run single by Austin Saeva gives the @LeRoy_Knights a 4-0 lead going into the bottom of the third. @PickinSplinters pic.twitter.com/sBL0OzUZho

Batavia answered back with a run of its own after Sam Sallome drove in Francis with an RBI single to shorten the deficit to 4-1.

The Blue Devils threatened once more in the bottom half of the fourth with the bases loaded and two outs. LaCarte worked out of the inning with a pop-out to the first baseman and concluded his outing on the mound. Saunders came in relief for the Knights.

The Blue Devils threaten with the bases loaded in the bottom of the fourth, but @LeRoy_Knights Kyler LaCarte ends the threat with a pop-out to third. 4-1 heading into the fifth. @PickinSplinters pic.twitter.com/Xj2FSroB2E

LaCarte threw 4.0 innings and allowed one run on five hits and struck out two with two walks.

“I had a good defense behind me and they were awesome all day and as long as I threw strikes, I knew they were going to make the plays,” LaCarte said about his outing.

Hale gave the Blue Devils another boost in the bottom of the fifth with an RBI single that scored Iburi-Bethel, making the score 4-2.

Batavia gets another run in the bottom of the fifth after an RBI single by Alex Hale. 4-2 Knights. @PickinSplinters pic.twitter.com/IABybpyxG7

Tresco, who also had a double on the night, added to his offensive showing with a stand-up RBI triple to right center in the top of the sixth to extend the Knights lead to 5-2.

Reece Tresco extends the Knights lead to 5-2 with this RBI triple to right center. @PickinSplinters pic.twitter.com/7vdr1ZSNo3

“At first I was just hoping for a base hit, but I hit the curveball and took it right center and the rest is history and I’m glad I could get a run in,” Tresco said about his RBI triple.

Batavia continued to show its fight and tacked on another un in the bottom half of the sixth after a sacrifice fly from Sallome scored Francis from third.

Sam Sallome gives Batavia another run in the bottom of the sixth with a sac-fly. 5-3 LeRoy headed into the seventh. @PickinSplinters pic.twitter.com/I7YgnTKGRN

Sallome finished his night going 1-for-3 with two RBI. Francis went 2-for-4 with two runs scored. On the mound, he threw 4.2 innings and gave up one run on three hits and had a game-high six strikeouts with two walks. Hale reached base in all four of his at-bats going 2-for-2 with an RBI and a walk.

Batavia came out with life in the seventh and set up a possible rally. With runners at second and third with two outs, the Blue Devils had a chance to tie the game. Saunders recorded the save with a pop out to himself that ended the game and sent the Knights to the New York State Far West Regional game.

Saunders threw the remaining three innings of the game and gave up two runs on four hits and had three strikeouts with two walks.

The Blue Devils out-hit the Knights nine to six and managed to have a runner on base in every inning, but failed to capitalize with runners in scoring position.

“I respect that team and their coaches a great deal because I know all of them,” Koukides said. “Coming back and beating a team that beat us 8-0 is huge. These guys are fighters and they work really hard.”

Koukides explained that building off the momentum and playing well defensively will be the key to their upcoming game.

“We got the bats moving a lot more, made less errors and just executed a lot better,” LaCarte said about his team’s efforts. “We need to keep the energy up in the dugout and as long as were positive were going to be fine.”

“It’s going to be a good test for us,” Tresco said about their upcoming regional game. “We need to go in with an open mind and show up on Saturday morning and be ready to play.”

Tresco finished his day going 2-for-3 with a double and triple with a run scored.