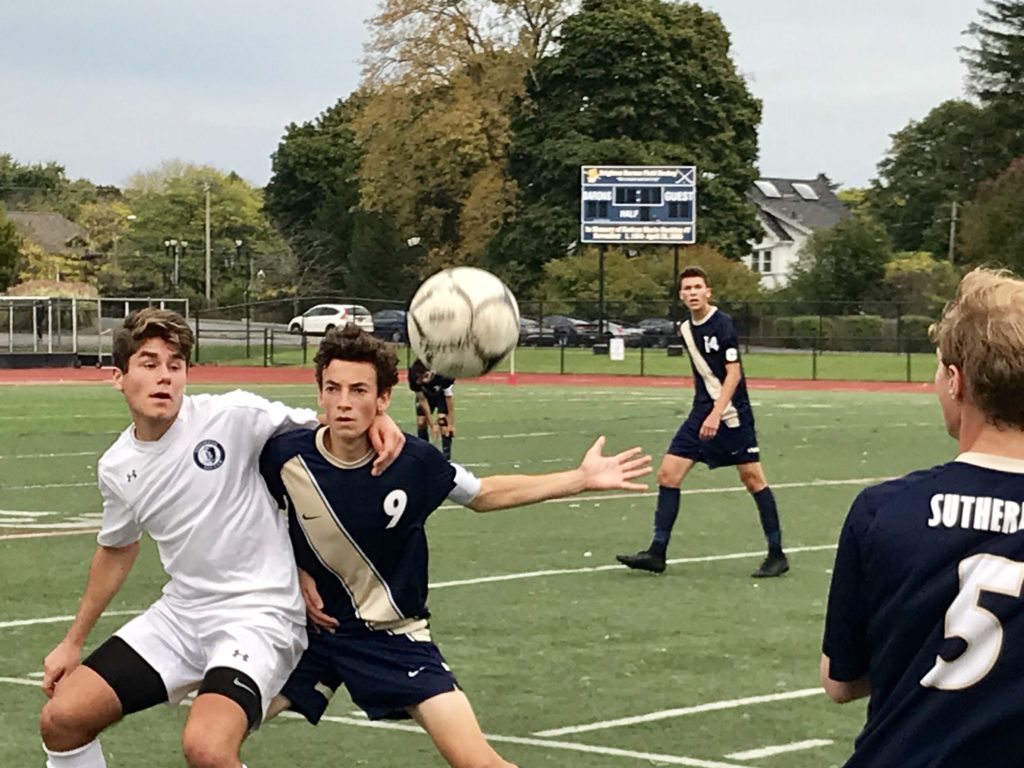 Brighton 4 Pittsford-Sutherland 0
Brighton improved to 8-1-0 (12-1-0 overall) with the win and cut the magic number to one for clinching their first division title since 2013. READ MORE.

Penfield 1 Victor 0
Milton Birmajer scored the lone goal of the game, a second half tally assisted by Tahj Mounnarat. The goal was Birmajer’s second of the season as was the assist for Mounnarat. The shutout was Penfield’s second of the year. Penfield is now 3-6-0 in Monroe County Division I with Victor a point ahead at 3-5-1.

Brockport 2 Greece Athena 1
Vander Hart scored with 28:13 remaining, and Brockport improved to 7-1-1 in Monroe County Division II and 12-1-1 overall. Zach Wharram gave the Blue Devils a 1-nil advantage in the first half.

Pittsford Mendon 3 Canandaigua 0
Connor Krapf opened the scoring for Mendon with a 37th minute goal, his first of the year, to take a 1-0 lead into halftime. Matt Bamford (Fifth) and Alex Morley (Third) added second half goals to bring the final to a 3-0 shutout, the Vikings second of the year.

Rush Henrietta 3 Gates-Chili 1
Hunter Kassel scored two first half goals, both assisted by Zein Mohamed, to help the Royal Comets to a Friday win. Kassel and Mohamed now have five and four goals on the season, respectively. Gabe Foltz added another Comets’ goal, his first of the year. Rush Henrietta and Gates-Chili are now both 3-6-0 in league play.

Aquinas 2 St. Francis (VI) 1
Josiah Fragnito and Gian Malcom found back of the net, and Aquinas (7-5-1) won its second straight game. Aiden Kopacz and Luke Putnam had an assist apiece.

McQuaid 1 SOTA/NW/NE 0
Nick Bonfiglio scored with an assist from Dan Malloy for the Jesuit Knights.

Bath-Haverling 2 Livonia 1
Logna Ingraham netted the game winner in the 58th minute as Bath-Haverling, No. 6 NYS Class B, came from behind to beat Livonia (12-3-0) for a second time this season. Kyle Feldman gave the Bulldogs a 1-nil edge in the 15th minute with an unassisted goal. Noah Hill answered 18 minutes later for Bath-Haverling (12-1-1). Thomas Binkowski assisted on the game winner. Binkowski leads the Rams with 10 goals and five assists. Livonia ranks No. 7 NYS Class B.

Pal-Mac 2 Mynderse 1
Jake Gallina netted a golden goal in the first overtime and Pal-Mac, No. 25 NYS Class B, improved to 10-3-0 (8-1-0 Finger Lakes) on the season. Nick Sapienza opened the scoring in the fifth minute with an assist from Gabe Martinez. Matthew Reardon leveled the score for Mynderse midway through the second half. Alex Wahl assisted on the game winner for Pal-Mac.

Hilton 1 Fairport 0
Justin Arilotta connected on the game winner in the second overtime, and the Hilton Cadets clinched the Monroe County Division I title – the first such title in program history since 2003. READ MORE.

Bishop Kearney 4 Kendall 0
Caleb Baraka scored twice including a first-half tally to give Bishop Kearney a 1-nil advantage at the half. TJ Title added a goal and an assist for BK, 9-4-1 on the season. The Kings have won three straight and undefeated in their last seven. Jordan Searles had a goal. Fernando Furioso, Ramsey Daymon and Yaak Awuok added assists.

Jasper-Troupsburg 2 Campbell-Savona 0
Connor VanGorden found the back of the net twice in the second half for Jasper-Troupsburg, ranked No. 15 NYS Class D. Ashton Perkins chipped in with an assist.