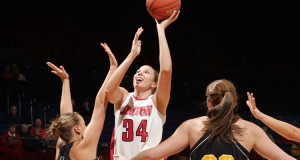 The 2011-2012 college basketball season has been been an exceptional year, especially for the Atlantic 10 conference. St. Bonaventure won its first A-10 regular season crown with an undefeated record in conference play. The Dayton Flyers defeated the Bonnies in the tournament finals to win their first A-10 Conference Tournament championship.  The A-10 conference was well represented in post-season play, and once again validated its status as one of the top conferences in all of women’s college basketball.  With a great combination of experience and youth, the future for the A-10 conference remains bright.

For Pickin’ Splinters, 10 players stood out from the rest of the crowd in 2011-12. Ten players, who in the eyes of the Pine,  constitute the best of Atlantic 10 had to offer.  Pickin’ Splinters is proud the present the  inaugural Atlantic-10 Benchmarks.

Megan Van Tatenhove (St. Bonaventure) – 13 points and 6 rebounds per game for the Bonnies. The Sheboygan Falls native was an integral piece in St. Bonaventure’s greatest season in the school’s history.

Justine Raterman (Dayton) – Do it all forward averaged 14.4 points and 6.3 rebounds to go with 46 threes. Was the Most Outstanding Player in the A-10 Tournament. Recently named to the Lowe’s senior class first team All-American.

Michelle Baker (St. Joseph’s) – The senior guard was the  Hawk’s leader with 13.0 points and 3.3 rebounds per game.