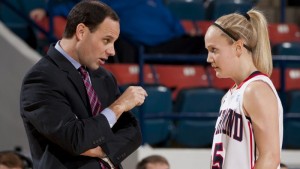 The Richmond Spiders just keep plugging away, as they notched their 20th victory on Monday night in their final non-conference game against the Longwood Lancers. The game, played in Farmville, (no, I’m not kidding) Virgina was never in doubt as the visitors won in dominate fashion, 72-59.

Richmond started with a flash of scoring from a variety of contributors, as four different player recorded buckets as the Spiders jumped out to a 10-2 lead. Their high scoring duo of Rachel Bilney and Abby Oliver netted triples, as Sam Bilney and Becca Wann converted in close. As balanced as the Spiders were, the Lancers struggled to find production outside of their stud utility junior in Chelsea Coward. Standing 6’1″, Coward attacked the goal, and finished three layups in the early going. But the game was more than seven minutes old before any other Lancer recorded a hoop.

Coward knocked down a mid range jump shot, her twelfth point of the first half, leveling the score at 16. But the Spiders didn’t sweat the mini run, and blew the game open with a 22-2 run immediately following Coward’s hoop. The spurt included dead eye shooting from deep, as Richmond knocked down four consecutive treys in just over two minutes. Kristina King connected on a bomb, and then found R. Bilney with a sharp chest pass for another three ball. The next two possessions saw Oliver, one of the A-10’s most prolific shooting guards, confidently stroke the deep ball, and the rout was on.

In the midst of this run, Lauren Shute entered the game, the earliest game action she has seen all year. She may not have recorded any measurable statistics, but the Spiders outscored Longwood 11-2 when Schute was in the game. The run helped the Spiders take a 16 point advantage into the locker rooms. The Lancers had two players (Coward and Crystal Smith) make 9/18 shots while the rest of the team made only one of their 13 field goal attempts.

Longwood would get as close as seven, but the Spiders never flinched. Their deadly accuracy from deep kept the Lancers at bay, as they once again gained distance from the home team as R. Bilney began to heat up. She drained a three to put Richmond back up by double figures, and hit another triple a few moments later. The forth and final long ball gave the Spiders a 17 point lead less than eight minutes remaining.

When all was said and done, the Spiders tallied 30 points from behind the arc, a huge advantage that the home team simply couldn’t overcome. Seven of those treys came from R. Bilney and Oliver, who combined for 44.4% of the teams points.Becca Wann contributed another productive night, tallying nine points (on only three shots) and 10 rebounds. Liz Brown had a similar day, as she only attempted two shots on her way to a five point, nine rebound performance.

The Spider regulars were able to get a little bit a rest, something that will prove valuable as Richmond plays three games in the next eight days. The late parts of conference play will be crucial, as the Spiders are looking to pass Charlotte for the fourth seed (and more importantly the bye that comes with it) in next months A-10 tournament.