Performance Of The Week | Tiana Myers 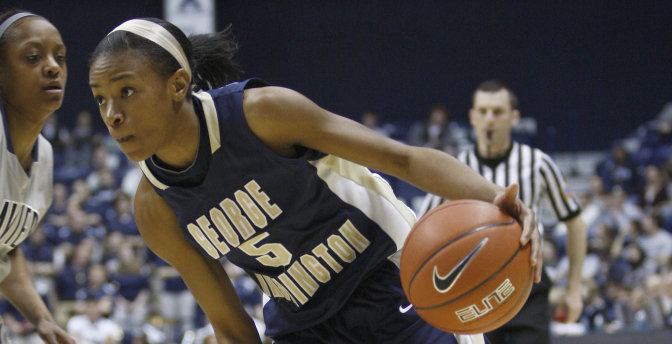 Tiana Myers and her Colonial teammates traveled to A-10 leader St. Bonaventure on Saturday to try to keep pace with the dominate Bonnies. They hung tough, and despite losing a hard fought battle by a count of 80-69, Myers did everything in her powers to put a scare into the home team.

Myers got history out of the way only four seconds into the game, as her long range two point field goal gave her 1,001 career points at George Washington.

The aggressive senior knifed her way to the bucket on various occasions, on her way to a career high 27 points. As she slashed to the goal, she was often fouled by a Bonnie defender that could not rotate fast enough to properly defend the speedy 5’9″ senior. Myers continuously punished the Bonnies from the free throw line, as she converted all eight of her attempts. When the lane was clogged, the four year starter (she’s started 103 of 108 collegiate games) stepped behind the arc and canned three triples. Her ability to do it all on the offensive end kept the game much in doubt until the final few minutes.

To go along with her 27 points, she added four assists and two steals. The two thefts matched the total for the Bonnies on the night. Her four assists were a season high, as the guard did it all on this night.

George Washington may only boast a 3-5 conference record, but when this team is clicking on all cylinders, they have the talent to defeat even the best the A-10 has to offer.

Who gets your vote for this weeks POTW?