The Pride of Dutchess County

The county where I grew up in New York happens to be the birthplace of two of the 289 members of the National Baseball Hall of Fame. I’m not sure how many other counties can say this, but in his book, Baseball in Dutchess County: When it Was a Game, Joseph V. Poillucci reports that he asked that question of the Hall of Fame itself and received an uncertain response. He was told that the Hall’s records only include the city, and not the county, where its members were born, but it is known that at least one other county can make the claim, since both Paul and Lloyd Waner were born in Harrah, Oklahoma.

They also sent him the birthplace information for all of the Hall of Famers, but it’s unclear as to why he didn’t follow through with their suggestion to determine this for himself. However, it’s likely that Dutchess County is one of no more than a few counties that can boast of having as many as two native sons in the Hall. It might take a little time and be a little tedious, but I’ll eventually do the research to figure out the answer for myself.

The two Hall of Famers in question are Wappingers Falls’ Dan Brouthers, one of the greatest hitters of the 19th century, and the Columbia-educated Eddie Collins of Millerton. Recently, I went on a mini-tour of the various tributes to the two greatest players that Dutchess County has ever produced, and I thought it might be interesting to share that with you here.

The first stop was the final resting place of “Big Dan” Brouthers, St. Mary’s Cemetery in Wappingers Falls. Brouthers was actually born in the nearby town of Sylvan Lake, but his family moved to Wappingers when he was just a youngster. Widely considered to be the Babe Ruth of the 19th century, he played 18 seasons in the majors from 1879 to 1896—plus a brief comeback at age 46 in 1904—and is still 9th all-time with a lifetime batting average of .342.

St. Mary’s isn’t a large cemetery, but it still took the assistance of a web site called Find A Grave to locate his grave stone. 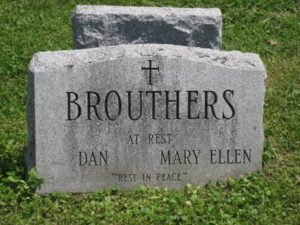 The next stop was just down the street to a field dedicated to Brouthers. I first discovered this field about 20 years ago, when I umpired a Little League All-Star game there. It was surprising to me to learn that this field existed less than 10 miles from where I grew up, and I had no prior knowledge of it. The field was dedicated in 1971 with an impressive monument to the first Hall of Famer from Dutchess County.

You’ll have to visit a site called BallparkReviews.com to see what I’m talking about, because unbelievably, the field and the monument were no longer there. It may not be so obvious if you compare the following photo to the one on the site, because they’re taken from opposite directions, but I assure you this is the former location of Brouthers Field. An email inquiry to the mayor of the Village of Wappingers Falls has yet to receive a response. I’ve since learned of the existence of the Sports Museum of Dutchess County, so maybe someone there can help solve the mystery of what happened to the Dan Brouthers monument. 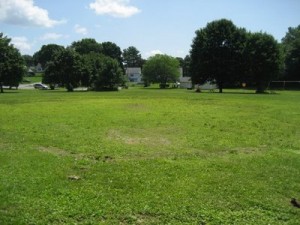 Dan Brouthers was the reigning major league leader in career home runs in 1887, the year that Eddie Collins was born about an hour northeast of Wappingers—as far as one could travel from there without leaving Dutchess County—in Millerton. Eddie “Cocky” Collins, so named not for his arrogance, but for his extreme level of confidence in his sheer ability to play the game, is generally considered to be—along with Joe Morgan and Rogers Hornsby—one of the three greatest second basemen in history. 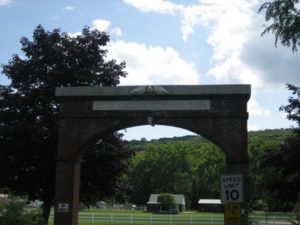 Collins is also known for being one of the clean players on the 1919 Chicago White Sox, commonly referred to as the Black Sox for the fact that eight players—including Joe Jackson—conspired with gamblers to throw the World Series, and were subsequently banned from baseball. In 1964, the good people of Millerton honored their hometown hero by dedicating the local park to him, building a beautiful stone archway at its entrance. This was the final stop on a day of paying tribute to the two players who share the distinction of being considered, in my opinion, the pride of Dutchess County.

The Pride of Dutchess County added by Chas on July 17, 2009
View all posts by Chas →

8 Responses to "The Pride of Dutchess County"