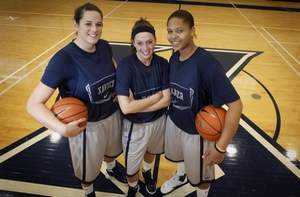 CINCINNATI – After overcoming a 19-point first-half deficit, the Xavier women’s basketball team could not pull off the upset falling 60-54 to visiting Eastern Illinois Wednesday night at Cintas Center. Junior Amber Gray scored a team-high 13 points for the Musketeers. Eastern Illinois improves to 10-4 overall for the season while Xavier falls to 3-10 […]

Sophomore Lynette Holmes Suspended Indefinitely from Women’s Basketball Team Holmes Has Averaged 12.0 Points and 5.2 Rebounds in 12 Games this Season Jan. 3, 2012 CINCINNATI – Xavier women’s basketball head coach Amy Waugh has announced that sophomore guard Lynette Holmes has been suspended indefinitely from the team for not fulfilling all the responsibilities of […]

WILMINGTON, N.C. – The Xavier women’s basketball team dropped a 59-52 decision at UNCW Thursday night at the Seahawks’ Trask Coliseum. Senior Tyeasha Moss led the Musketeers with 17 points while freshman Lakeisha Crouch grabbed a game-high eight rebounds in her first collegiate appearance. With the loss, the Musketeers fall to 3-9 on the season while the Seahawks improve […]

LAS VEGAS – The Xavier women’s basketball team dropped its final game of the 2011 Duel in the Desert 73-51 to Oklahoma Tuesday afternoon. Sophomore Lynette Holmes led the Musketeers with 17 points and a career-high 12 rebounds for her first career double-double. Xavier falls to 3-8 on the year while Oklahoma improves to 7-3 […]

Xavier Runs Out Of Gas In 2nd OT

LAS VEGAS – In its first overtime game of the season, the Xavier women’s basketball team fell in the second extra period to Ohio, 80-75. Junior Jessica Pachko posted her fourth double-double of the season with 13 points and 13 rebounds as one of four Musketeers in double-figures scoring. With the loss, Xavier drops to […]

LAS VEGAS – The Xavier women’s basketball team pulled to within two late in the game but the Syracuse Orange outlasted the Musketeers, 70-67, Sunday at the Duel in the Desert. It was XU’s first game of three to be played at UNLV’s Cox Pavilion. Three Musketeers posted double figures scoring, including sophomore Shatyra Hawkes […] 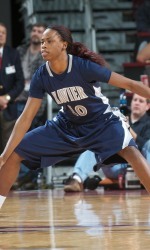 CINCINNATI– Xavier concluded its five-game home stand Friday with a 65-49 defeat to Middle Tennessee State at Cintas Center. Sophomore guard Lynette Holmes had a team-high 15 points from 5-of-8 shooting. XU falls to 3-5 for the season and MT improved to 6-4. The all-time series between these two teams is now knotted up at […]

CINCINNATI– Xavier topped Morehead State 71-66 Tuesday night and in the process recorded its 150th win at Cintas Center. Jessica Pachko matched a career-high 14 points and earned her second consecutive double-double with a new career-high 15 rebounds. The Musketeers earned back-to-back victories for the first time this season and improve their record to 3-4. Morehead […]

CINCINNATI– Xavier knocked down Cincinnati in the Skyline Chili Women’s Crosstown Shootout 69-60 at Cintas Center Sunday. Sophomore guard Shatyra Hawkes had a career-high 19 points and dished out a game-high five assists. The Musketeers improve their record to 2-4 for the season and win their third consecutive Kendle Cup match-up against the Bearcats. Cincinnati suffered its first loss of […]

Xavier Battles, Stanford Too Much 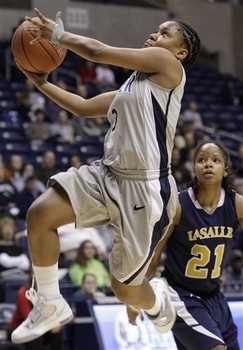 When Xavier hosted Stanford in a rematch of an Elite Eight match up of a year ago, the general consensus was that the more experienced visitors would impose their will upon the relativity green home team…