Courtesy: Brockport Athletics The SUNY Brockport men's baseball team split a doubleheader with the #20 Oswego State Lakers in a doubleheader on Sunday. The Golden Eagles dropped the first game of Sunday's doubleheader by a tight score of 2-0. Before winning the final game of the series by a score of 13-11 to hand the Lakers their first conference loss of the season. Brockport … END_OF_DOCUMENT_TOKEN_TO_BE_REPLACED

Courtesy: U of R Athletics Two more solid pitching performances and an opportunistic offense in both games enabled the University of Rochester to defeat Clarkson University in a Liberty League softball doubleheader at Southside Field on Sunday afternoon. UR won the opener – a classic pitching duel between Emily Sharlach and Olivia Zoeller – by a 3-0 count. The Yellowjackets … END_OF_DOCUMENT_TOKEN_TO_BE_REPLACED

Courtesy: Nazareth Athletics Sophomore Cassidy Hoffmier hit a pair of doubles and drove in all three runs in a 3-2 win and fellow sophomore Marissa Berghorn had a walk-off hit up the middle to score senior Sarah Simmons as the Nazareth College Softball team won a pair of 3-2 victories over Utica Sunday in an Empire 8 doubleheader. Nazareth (15-15 overall, 8-6 Empire 8) … END_OF_DOCUMENT_TOKEN_TO_BE_REPLACED

Courtesy of RedWingsBaseball.com A pair of long-balls in the first two innings, the first by Jorge Bonifacio quickly followed by teammate Darick Hall, set the tone for the Lehigh Valley (7-7) offense. The Ironpigs collected 13 hits and cracked a total of four home runs, in a 12-4 win over Rochester (7-7) which dropped its second straight. Joey Meneses, Andrew Stevenson, and … END_OF_DOCUMENT_TOKEN_TO_BE_REPLACED 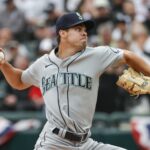 Courtesy of PurpleEagles.com CHICAGO, Ill. – Former Niagara baseball pitcher Matt Brash made his MLB debut on Tuesday, starting on the mound for the Seattle Mariners against the Chicago White Sox. Brash is the first former Niagara student-athlete since Sean Bentivoglio (New York Islanders) in 2009 to play in a game with one of the Big Four leagues (MLB, NHL, NFL, NBA). Brash … END_OF_DOCUMENT_TOKEN_TO_BE_REPLACED