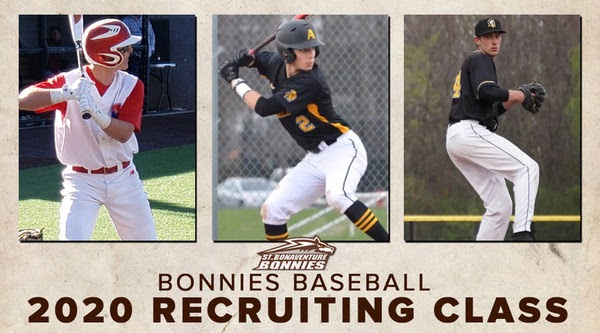 Devine is a 6-foot-4 left-handed pitcher from Guelph, Ontario who will transfer from Monroe Community College. At Monroe last season, he averaged over 11 strikeouts per nine innings after fanning 49 batters in 38.2 innings of work with 17 of his 19 appearances coming in relief. Prior to the spring sports shutdown, he started three games this season with Monroe, striking out 19 in 16 innings while posting a 3.94 ERA. He intends to major in sociology at St. Bonaventure.

SUDBROOK ON DEVINE: “Over the summer, he pitched in the Great Lakes Summer League and he really put it together. He won six games and had an ERA of 1.24. Opponents hit .144 against him. He throws in the mid-80s, but has an outstanding backdoor slider and really tore it up when he learned to command it. We think he will compete to be a conference starter when he comes in.”

Nucci is a product of Greece Athena High in Greece, N.Y. where he played shortstop and pitched. He is a four-year varsity starter, compiling a .385 on-base percentage while also having a 1.69 ERA on the mound. In summer ball, he has played for the Rochester Rough Riders where he hit .402 and led his team in doubles, total bases and RBIs and helped his team to a third-place finish in the Diamond Nation 18U World Series. He plans to major in finance at St. Bonaventure.

SUDBROOK ON NUCCI: “Jagger has good size; 6-foot-1, 195 pounds, and he projects as a corner infielder and or outfielder. He has really good bat speed, he has a mid-90s exit velocity going into his senior year of high school and we really think he will be able to swing the bat. He has good arm strength to be a third baseman or right fielder.”

Tarmino joins the program from Fairpoint, N.Y. where he is a senior at Fairpoint High. As an outfielder there, he earned his school’s scholar-athlete award twice. In summer ball, he played for Diamond Pro Baseball where he led his team in stolen bases and batted leadoff. Also an all-county selection in football, his father played professional hockey in Europe while his mother was a member of the Bonnies women’s soccer program during her undergraduate days and his sister, Kenzie, was a starter as a freshman for the Bonnies this past fall.

SUDBROOK ON TARMINO: “We have had lot of luck in the Rochester area over the years and John is another product from that area. He runs really well and throws really well from the outfield. He also possesses some pretty good bat speed as well. We wonder how we will be affected by the season being canceled, but we could definitely need some outfield help and he will come in and compete with the other outfielders we signed in the fall for playing time there.”

This trio joins eight student-athletes who committed to the 2020 recruiting class during the fall signing period, bringing the total number of newcomers for next season to 11. To read about the previous commits, please click here.