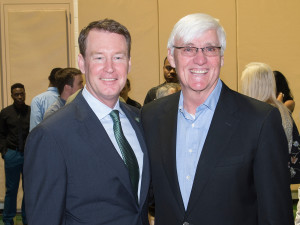 “I’m extremely excited about joining the Charlotte 49ers as the new basketball coach,” Price said. “I’m excited to get to know the current players as we move forward and start a new era. I’m looking forward to putting a team on the court that plays an exciting brand of basketball that our students and fans will enjoy watching.”

Price has spent seven years coaching in the NBA. For the last two years, he has been an assistant coach on the Charlotte Hornets staff under head coach Steve Clifford. As a collegiate player at Georgia Tech he helped the Yellow Jackets move from last place to ACC champions. As a player with the Cleveland Cavaliers, he helped the team to seven playoff bids over his final eight years. As a coach in the NBA, he has helped four of his last six teams reach the NBA playoffs.

“We have taken an important step in strengthening our program by welcoming a coach who has experienced incredible success at the collegiate and professional levels.  Mark is known as a person who makes those around him better,” said Dubois. “The players will take great inspiration from his personal example, and learn the game from someone with deep knowledge about it.”

He has played an integral role, for instance, in helping Charlotte Hornets standout Michael Kidd-Gilchrist’s well-documented improvement in his shooting percentage. Last season, Charlotte reached the Eastern Conference playoffs.  In 2012, he was a player development coach for the NBA playoff-bound Orlando Magic. He has served as a shooting coach on several NBA coaching staffs (Golden State Warriors in 2011, NBA playoff representative Atlanta Hawks in 2009, 2010 and the Memphis Grizzlies in 2008).  While in Atlanta, he helped the Hawks to two of their current seven straight playoff appearances.

Price spent the 1999-2000 season as an assistant coach on Bobby Cremins staff at his alma mater, Georgia Tech.

Price was the 25th overall pick in the 1986 NBA Draft and played in 772 regular-season games for the Cleveland Cavaliers, Washington Bullets, Golden State Warriors and Orlando Magic. He averaged 15.2 points and 6.7 assists in his career. Price, who played nine seasons for the Cavaliers is second in franchise history for career assists (4,206), was named first-team All-NBA in 1992-93 and third-team All-NBA three times (1988-89, 1991-92 and 1993-94). He played in four NBA All-Star games and captured the 1993 and 1994 NBA three-point shootout titles. Price was also a member of Dream Team II, which won the gold medal at the 1994 FIBA World Championship. The Cleveland Cavaliers have retired his #25 jersey.

Price enjoyed a stellar four-year collegiate career at Georgia Tech. Price is one of four players to ever be named first or second team All-ACC in each of his four seasons. He earned second-team Associated Press (AP) All-American honors in 1985 and third-team AP All-American honors in 1986. In 1985, he was named ACC Tournament MVP after helping lead Georgia Tech to the first ACC Tournament title in school history. Price also led Georgia Tech to its first ACC regular-season title in 1985. During his career at Georgia Tech, the Ramblin’ Wreck made two NCAA Tournament appearances. In 1985, Georgia Tech lost to No. 1 Georgetown in the East Regional Finals of the NCAA Tournament. Price has had his #25 jersey retired by Georgia Tech as well.

Price replaces Alan Major, who coached the 49ers for the last five years before taking a medical leave during the 2014-15 season.