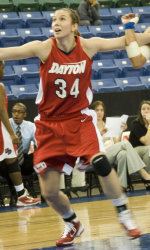 After a standout four-year career for the University of Dayton women’s basketball team, Justine Raterman will take her talents to the next level overseas.

Raterman signed a contract to play for CAB Madeira of the Portugal-Liga Feminina, the same league former Flyer Kendel Ross ’10 played in for team GDESSA/Barreiro. Ross led the league in scoring with 22.0 ppg during the 2011 season.

CAB Madeira finished fourth in the 12-team league for the regular season in 2012 and lost in the semifinals of the league championship.

Raterman will report to Portugal in September for training camp for the 2012-13 season which starts in October.

Raterman, named the 2012 Atlantic 10 Most Outstanding Player after leading the Flyers to their first women’s basketball league championship, was the first player to be named to the A-10 All-Championship team in four consecutive years. The Atlantic 10 Rookie of the Year as a freshman, Raterman garnered All-Conference honors her final three years and All-Rookie honors her first year.

Raterman graduated this spring with a degree in mathematics and AYA education . Along the way she collected an impressive academic awards list, including being named to the Lowe’s Senior CLASS Award All-America First Team. She also is a CoSIDA Academic All-District honoree.

She was a part of the senior class that won 90 games during their careers. They had 20+ win seasons all four years and advanced to the postseason every season of their careers, including three consecutive NCAA Tournament appearances.